The former chairman of the United Nations committee representing people with disabilities has added his voice to the chorus of anger over the government's shake-up of the sector, challenging its claim it is in acting in accordance with the UN convention.

Ron McCallum, who is blind, is a former dean of law at Sydney University and, until December, was chair of the United Nations Committee on the Rights of Disabled Persons in Geneva. He condemned the federal government's action, saying it revived old, outdated attitudes that those with disabilities were not people with rights but "objects of charity".

Last week the Department of Social Services announced it would fund an alliance of five groups representing disabled people by demographic rather than specific need, plus one service provider.

Data shoe that 49% of children with #autism wander/elope from safe settings.

Autism Aspergers Advocacy Australia (known as A4), the national peak body for autism spectrum disorder (ASD), wrote an open letter to Scott Morrison MP, the new Minister for Social Security. The letter gives essential information about ASD and the impact of Government policy for people living with ASD, and asks for a meeting to discuss ways to improve outcomes.

People with autism have difficulty getting a job. The letter below describes the experience of one person and his carer on reaching a point just 2 years after leaving school.

This experience shows that the Commonwealth Government's Disability Employment Scheme (DES) is largely intractable. The Australian Bureau of Statistics describes its abysmal outcomes for people with autism/ASD (link here):

The 41.2% of people with autism in the labour market in 2012 experienced 23% unemployment (there is improvement since 2009 when labour force participation was just 34% and unemployment was 41%).

My friend is the mother of a child who is deaf and also has autism. She has been forced on to Newstart. My friend already works five days a week but with limited hours. Luckily she works at her son’s school but must be on call to deal with any adverse behaviors that might happen. Last week, as an example, her son head-butted a glass pane door of his classroom because he could not get in. It smashed and he cut his face all over. Said my friend, “ He was damn lucky not to have cut his eyes or a major blood vessel. Bled like a stuck pig. Added 20 years and too many grey hairs to count.”

At home she also has to deal with meltdowns. ...

My friend does not get carers payment from the Government because – “ I don’t provide constant care in the home because he goes to school” ...

AND to top this off, because she has been shafted to Newstart, she is expected to apply for ten jobs per week. This single mother who can be called from work at any time to care for her child, who has the sole care of a child who is both deaf and autistic, a child that has challenging behaviour at home and school that requires her constant vigilance, who also has the sole care of another child … This mother is expected to look for ten jobs per week! Why? Because the Government thinks she is a LEANER and somehow has the capacity to not only look for ten jobs a week but also work full time. As she so eloquently put it – “How f#*ked is that?” 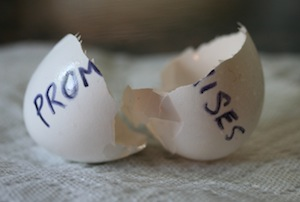 As well as describing the NDIA's eligibility criteria for ASD as gobbledygook (see here), community members regards the NDIA's approach to Early Intervention for children with ASD as flawed. The NDIA adopted the “Seven Key Principles” approach described in a document from a “Workgroup on Principles and Practices in Natural Environments” (see download page here)

In this video Bob Buckley describes his recent experiences with National Disability Insurance Scheme (NDIS) planning. His advice tries to help others prepare for their transition to the NDIS. He suggests that people can reduce their stress over NDIS planning if they better understand the processes and likely outcomes.

Bob Buckley's son (who is 23yo with severe autism) has one of the earlier NDIS plans approved in the ACT. The process took 11 days and delivered substantially more support/resources than was previously provided. The plan is much more flexible than the previous arrangement.

For children with autism/ASD, Australia lags far behind the USA. Australians like to think their health system is superior to the US health system ... but not so for the growing number of children diagnosed with ASD in Australia.

The US Government made it clear that US "states must cover all medically necessary services for children, including services to address ASD" (see http://www.medicaid.gov/Federal-Policy-Guidance/Downloads/FAQ-09-24-2014.pdf).