It started with just a runny nose and a routine trip to the doctor. Then Gungahlin mother Therese Bean noticed her son was losing weight.

Nicholas, 23, who has non-verbal autism, began spending all day lying on the couch and struggled to keep food down. A lump the "size of a 50 cent coin" appeared under his chin. Eventually, it became difficult for him to breathe. 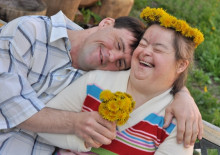 The deaths of more than 700 Australian adults with an intellectual disability could have been avoided with more appropriate health care and monitoring, a UNSW study has revealed.

Research by UNSW has found that while Down syndrome itself doesn’t cause death, it is still coded that way in a flawed classification system. Photo: Shutterstock.

A total of 732 Australian adults with an intellectual disability died in NSW over six years, many from causes or conditions that could have been avoided with more appropriate health care and monitoring. 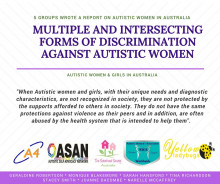 A group of autistic women advocates prepared a submission for the United Nation's Special Rapporteur on Violence against Women.

The Federal Government has announced an independent review of the National Disability Insurance Scheme (NDIS) to examine overall costs, value for money and its long-term sustainability.

Treasurer Scott Morrison announced the Productivity Commission review on Friday afternoon with a position paper to be released in May, followed by a report in September.

The response from Disability Minister Christian Porter MP’s office on increasing autism diagnoses is very disappointing according to Bob Buckley, A4 Convenor. Autism Aspergers Advocacy Australia or A4 is the national grass-roots advocacy group for autism spectrum disorder.

A4 editor: The following is not specifically about autism or disability ... it is here to help/inform any autistic adults who are having issues with Centrelink's cruel new system for scamming/fabricating debts from the most vulnerable.

Recently, the Education Council released its first report based on data collected for the Nationally Consistent Collection of Data: School Students with Disability.

A4 provided the submission below in response to the DSS Discussion Paper (see https://engage.dss.gov.au/disability-em…). A4's submission starts out saying:

The opening sentence of the Minister’s Foreword to the discussion paper says:

Applied behavioral analysis is the most widely used therapy for autism, but some people say its drills and routines are cruel, and its aims misguided.

When Lisa Quinones-Fontanez’s son Norrin was diagnosed with autism at age 2, she and her husband did what most parents in their position do — they scrambled to form a plan to help their child.