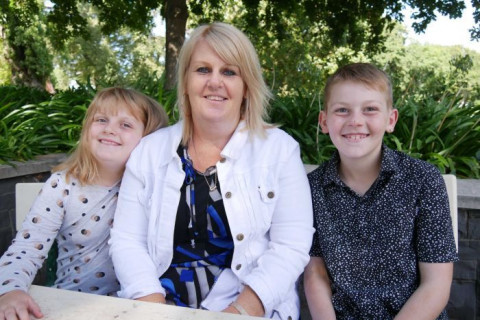 One month into the school year, Melinda Walkden's two children, who have autism, are yet to start primary school.

In 2018, the northern Tasmanian mother spoke out about the treatment of her nine-year-old daughter, Jayarna, who was put in an open cardboard box enclosure in her classroom in 2017.

The single mother is now locked in a new battle with the state's Education Department.

The department wants to transfer Jayarna and her 11-year-old brother Addison to a new school, but insists a trespass order preventing Ms Walkden from setting foot on school premises must remain.

Ms Walkden was issued with the trespass order by her daughter's primary school in October 2018, just a month after issues were raised in State Parliament and the media.

The trespass order was issued on the basis of "unacceptable behaviour", alleging Ms Walkden had verbally abused staff, used aggressive and threatening language and had put her hand in close proximity to a staff member's face.

The order came as a surprise to Ms Walkden who said the issues detailed in the complaint had never been raised with her in previous meetings with the school.

"When the story went to media about Jayarna being put in a box, that is when the trespass order came on, and the things that were written in it were untrue," she said.

"Nothing that was written in that was ever spoken to me about in any of these meetings."

Photo: Jayarna was placed in an open cardboard box in a classroom next to a rubbish bin instead of a sensory tent. (Supplied: Melinda Walkden)

She said since the order had been in place, she had missed school assemblies, sports carnivals and a Mother's Day morning tea, and that it had had a devastating impact on both of her children at the school.

"You cannot drop special needs children off at the front office and expect that they're going to have a good day," she said.

"It's as simple as that. My kids run on routine."

Ms Walkden said Jayarna's development had suffered in particular since the order had been put in place.

"She can't deal with the fact that I'm not allowed to be in the school, I've always been a parent that's been at every assembly and it's just heartbreaking," she said.

Photo: Jayarna Walkden's mother says her daughter was traumatised and teased after being placed in the box. (ABC NEws: Manika Champ)

Ms Walkden said she had no right of appeal.

"I don't feel I've been listened to, I feel like it's been a very one-sided story," she said.

Late last year, Jayarna and Addison were issued with a transfer order for a new school, but Ms Walkden was told the trespass order would remain in place.

"They said 'a fresh start', but it doesn't feel like a fresh start, when they still won't let me into another school," she said.

"I think it's totally cruel and I don't think there's enough understanding on the Education Department's side about how much it actually affects kids.

"Us grown adults we can deal with what we have to deal with, but yeah, it's caused so much anguish to my kids."

She said the assault was not listed as a ground in the trespass order.

Trespass orders being used as retribution for parents who speak out

"If there's violence, obviously you want to protect your school and your children, so in those instances I can understand a trespass order," she said.

"But when parents push back and say my child needs more support or 'I'm not happy with what's happening in the school', it's not uncommon, unfortunately, for trespass orders to be used."

She said there was no right of appeal against the orders and they were handed out at the discretion of school principals.

Ms Desmond said she was aware of four other cases of parents of children with special needs being issued the orders.

"In the last seven years with families I've been directly involved with, at least four of them have been subject to trespass orders," she said.

"And it's at their whim when they choose to lift it.

"I think it's highly unfair that there's no review mechanism here and the power imbalance is huge."

She said there needed to be an independent body in Tasmania that could look at these issues.

"We don't have an independent disability commissioner, we don't have anybody outside of the school system that you can go to for a review," she said.

"What we've got now is a broken mother, two broken children and an education system that's let them down, they're not in school."

The Education Minister Jeremy Rockliff wouldn’t address the lack of an appeals mechanism, and supported the department's use of the orders.

The Department of Education said in a statement it had obligations under the Work Health and Safety Act and the Education Act to ensure the safety of staff and students.

"Violence and abuse against our staff will not be tolerated in our schools," it said.

"Unfortunately there are incidents where parents act inappropriately towards our staff [and] in these instances we have an obligation to protect our staff, and this may mean trespass orders are required to ensure safety."

The Government would not comment on how many trespass orders had been issued by principals, or how many had been enforced on parents of children with special needs.

"Unfortunately Melinda Walkden has a history of abusing and assaulting Department of Education staff," the department said.

"She was convicted of assault against a Department of Education principal in June 2016 and there has been a number of other department employees who since then have gone off work on workers' compensation due to injuries received from Mrs Walkden."