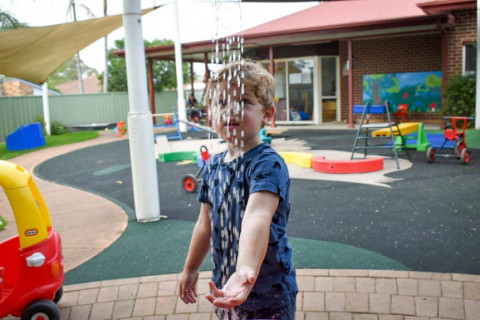 Children with developmental delays such as autism have become the victims of postcode discrimination, with some in poorer suburbs waiting hundreds of days for the crucial diagnosis often needed to access the National Disability Insurance Scheme (NDIS).

ABC investigation finds children with disabilities in poorer areas are facing longer wait times
One child waited 697 days to be seen, with another on the list for 640 days before being assessed
Parents have described the stress their families have endured while they wait

An ABC investigation has exposed how a child's access to early intervention therapies under the multi-billion-dollar scheme can depend on where they live, in what some are describing as "developmental apartheid".

Hospital records have revealed while children in more disadvantaged areas are waiting almost two years to get the diagnosis many parents say is required for federal government support, those in wealthier suburbs are being seen in as little as two months.

Shanice Rees's four-year-old son William waited 15 months to see the specialist team at Campbelltown Hospital, where he was diagnosed with autism.

Before that diagnosis, she could not access any NDIS funding for her son.

"I can't even explain to you how stressful that was," Ms Rees said.

"The early years are where you're supposed to be able to catch everything.

"I'd love to catch it early, but it's up to you to help me get it early, and not wait until we're 12 months out from school and that's when we get the help — it's ridiculous."

Children at Campbelltown Hospital are waiting up to 23 months for diagnosis.(ABC News)

Australian and international guidelines recommend children wait no longer than three months for a developmental assessment.

Those assessments are used to find out the underlying cause of developmental delays, and in the public system they are carried out by a team of specialists and allied health professionals.

But for children living even just one hour away from each other, there is a huge variation in wait times for those assessments.

And William's story is all too common.

In his south-western Sydney suburb of Campbelltown, hospital records have revealed children with developmental delays are typically waiting a year for an appointment with the team.

The documents also reveal one child waited 697 days to be seen, with another on the list for 640 days.

That is compared to Sydney Children's Hospital at Randwick, an affluent eastern suburb, where children are waiting between two and 10 months for an assessment.

Dr Freelander said there were a few reasons for the discrepancy in wait times, but it was partly because parents in wealthier areas were more likely to be able to afford private assessment, taking pressure off the public system in their neighbourhoods.

He said the waiting times were putting children's futures at risk.

"It means there's very little time to get some intervention before you start school, and it means a child may start school really behind their peers and that can lead to long-term problems both in terms of academic outcomes and behavioural outcomes," Dr Freelander said.

Even though families, health and disability experts said in most cases a diagnosis was required for children with disabilities to access support, the Federal Government insisted this was not the case.

"If you have a child under the age of 6 who you believe has a developmental delay, you can take them straight into an early childhood, early intervention partner," NDIS Minister Stuart Robert told the ABC.

"You do not need a diagnosis to seek access to the NDIS."

But Larraine Brown who works at KU Starting Points Macarthur, a support service centre in Campbelltown for children with disabilities, said families "need that diagnosis" for long-term funding under the NDIS.

Associate professor Julian Rait from the Australian Medical Association said there was a gap between what the Government said was happening and what people were experiencing.

"I think [the Government is] out of touch with what the NDIS are actually doing," he said.

"We would encourage the Government to have a conversation at least with the NDIS about this."

That rings true for Campbelltown mother April Whitley, whose son Ayden was diagnosed with autism when he was two and a half.

"Without a diagnosis you're not helped," she said.

"If you have a diagnosis you can get funding to help you whereas if you don't have it, it's like you're not there."

In recent years, Campbelltown Hospital received a multi-million-dollar upgrade, but the documents obtained under Freedom of Information (FOI) there had been no increases in staffing levels for the child assessment team in almost a decade.

It was incredibly frustrating for paediatrician Jenny McDonald, who used to work in the team.

"We had a rapidly expanding population, a lovely shiny new hospital, but no negotiation around increasing staffing to the team at Campbelltown," she said.

Dr McDonald said she believed a growing population and the rollout of the NDIS had heaped pressure on the system without adequate additional funding for diagnostic teams.

She said she began every assessment with an apology for the waiting times, before quitting in 2017.

"There were many reasons for leaving but mostly it was about frustration; I just felt disappointed for the families we were trying to help," Dr McDonald said.

Since her departure, a new model of care has been introduced at the hospital, which sees urgent cases prioritised.

The ABC first covered this story in 2017, when the state Health Minister Brad Hazzard promised "more would be done" if needed.

Almost three years on, little appears to have changed.

The ABC approached Mr Hazzard's office for comment but a spokeswoman said he was too busy handling the coronavirus outbreak to answer questions.

She cited a review into NSW child health services released in January, which recommended more cooperation between the health, education and NDIS sectors to better support children with developmental delays.

Half of kids in Melbourne's south-east knocked back

The issue is not unique to Sydney.

Children in Melbourne's south-east are also waiting an average of 12 months for an assessment at Monash Children's Hospital in Clayton.

While hospital records are difficult to directly compare, figures from the Royal Children's Hospital in Parkville, in Melbourne's affluent inner north, show there is a median wait time of six months for an appointment.

These statistics fail to capture the numbers of children who are not even seen in the public system.

The FOI data revealed Monash Children's Hospital rejected half of its referrals for developmental delays because it did not have enough "service capacity".

It said if appropriate referrals were accepted, "wait times would be in excess of four years".

Mr Rait said the desperation for an appointment was forcing families to dip into their own pockets and pay for a diagnosis in the private system, to access NDIS funding.

"I think there is inherent discrimination arising," he said.

In a statement, Victorian Health Minister Jenny Mikakos said her Government was aware of the waiting times and said the Commonwealth needed to do more.

"We understand the anxiety a parent feels when their child is waiting for an assessment and we are working to ensure more families can access expert advice faster, regardless of where they live," she said.

"We've delivered record funding to Monash Health each and every year, but we need the Commonwealth Government to step up."

That is unlikely to happen, with the federal NDIS Minister Mr Robert telling the ABC: "we do not have any plans to step in and solve the failings of state hospitals because that is their responsibility."

"I know everyone wants the Federal Government to solve every single problem but we can't."

Ms Rees's tolerance for the buck passing between governments is wearing thin, as she lives with the challenges of raising children with developmental delays.

Her youngest daughter, Gracie, is also showing signs of autism and is on the waitlist for a diagnosis at Campbelltown Hospital.

"I'm terrified of how long I'm going to have to wait for my daughter," she said.

"I feel like I've got another fight on my hands."