Ill-informed debate over eligibility and arbitrary line-drawing through the autism spectrum is the result of years of neglect of ­autism research and a failure to engage with those who had the ­answers. It was a perfect storm waiting to happen, and the gales have now blown in.

The man heading the $22 billion National Disability Insurance Scheme “cannot guarantee” that specific levels of autism will remain on a list of conditions that gain automatic entry to the program, just weeks after the agency accidentally published a document that changed access guidelines.

On the 23/5/2018, the Minister for Social Security wrote to autism organisations to "assure" them that there would be "extensive consultation with stakeholders and the community" before making any changes to NDIS eligibility (see http://a4.org.au/node/1761).

Three days later, on the 26/5/2018, the NDIS tweeted that it "updated our website" and provided a link to https://ndis.gov.au/people-with-disability/access-requirements/completing-your-access-request-form/evidence-of-disability. The web page has new eligibility requirements. Autism stakeholders were not consulted about the changes to the NDIS eligibility process that appeared on that webpage.

A4 is happy to assist you and the NDIA. We are keen to be "moving forward". A4 is happy to meet "later in the month" as you requested.

A4 keeps trying to improve outcome for autistic people in Australia. We believe a meeting with you has real potential.

A secret plan to restrict the access of autistic people to the $22 billion National Disability Insurance Scheme would prevent them from qualifying “automatically” for taxpayer-funded support as part of a sweeping overhaul to rein in costs.

The Weekend Australian has confirmed bureaucrats have been working on a strategy since late last year to pare back the number of people with autism receiving funding packages. 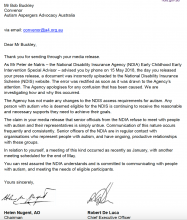 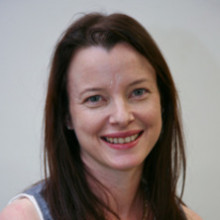 There is concern older Australians on the autism spectrum are being let down by mental health professionals who lack awareness of the developmental condition.

Researchers are calling for urgent training of psychiatrists on the diagnosis and management of autism in adults, who are at greater risk of suicide.

Older Australians on the autism spectrum are being let down by a gap in mental health services for autistic adults, a gathering of psychiatrists has been told.

The agency running the ­$22 billion National Disability ­Insurance Scheme is spending up to $10 million a year on barristers and legal services in a bid to arrest the dramatic rise in the number of people successfully appealing for more money in their support packages or trying to get into the scheme.

The agency has been explicit in its fears over the future of the scheme, saying the risk to its ­financial stability is “extreme” from unfavourable court and tribunal decisions that have the ­potential to “vastly increase the scope of both access and reasonable and necessary supports”.

Canberrans are leaving the National Disability Insurance Scheme at the highest rate in the country, as services and advocates in the ACT call for an overhaul of the scheme's internal bureaucracy.

Between September and December 2017, 139 people joined the scheme in the ACT but 101 others left. Figures provided by the National Disability Insurance Agency, which runs the scheme, confirmed 381 Canberrans had exited the NDIS since 2013.

When compared to those joining the scheme, the rate of ACT exits topped the nation, at three times the national average.