On her first day in an exciting new job, Mzia walked in to find a small “Breville-style” coffee machine placed on a computer desk in the reception.

Next to the machine was a container of long-life milk.

Mzia looked at the small Breville machine and told a senior manager: “This is not a commercial machine.”

It was, according to evidence aired at the disability royal commission, hardly what she needed to provide “barista training” at the BusyBeans “coffee school”.

The BusyBeans program won awards, was later spruiked by Australia’s national disability insurance scheme as a grants success story, and Mzia said the way it was advertised meant she had been thrilled about the opportunity.

“I was gobsmacked,” she told the inquiry of what she walked into. “I thought it would be a lot more set up.”

The royal commission this week examined the disability employment services (Des) program, a $1bn-a-year federal government scheme in which private companies and nonprofits are paid to place people with disability into work.

It once again touched on a longstanding criticism of the system: that privatised providers can refer the jobseekers on their books to jobs or training courses run by a related entity.

For each placement, the job agency gets an “outcome” payment from the government. They get further payments if the person stays in the job or course, hitting certain weekly benchmarks.

The employer, meanwhile, might get wage subsidies from the government to cover the cost of the new workers. And the programs they run – supported employment or training – might garner government grants.

Yet, according to a recent report commissioned by the government and obtained by Guardian Australia under freedom of information laws, genuine employment outcomes are underwhelming.

The royal commission this week focused on one “region” of BusyBeans coffee schools, a program established by health services company Rehab Management in March 2019.

It heard a related entity, AimBig, was a Des provider that referred jobseekers on its books to the BusyBeans program.

Among them was Mzia, who lives with attention deficit hyperactivity disorder and hadn’t been in a permanent job in 25 years.

Under the BusyBeans model, people with disability – either paid, in part using about government wage subsidies, or unpaid interns – learned to make coffee with trainers like Mzia.

They served as in-house baristas for workers at AimBig and Rehab Management offices or other external businesses or worked in a “cafe environment”.

Mzia had lengthy experience in casual hospitality jobs and was adept at making coffee, but she had no formal qualifications.

There was no induction or training when she started the job, Mzia told the inquiry. And at her site at least, the inquiry heard, there often weren’t enough people in the office to make coffee for. 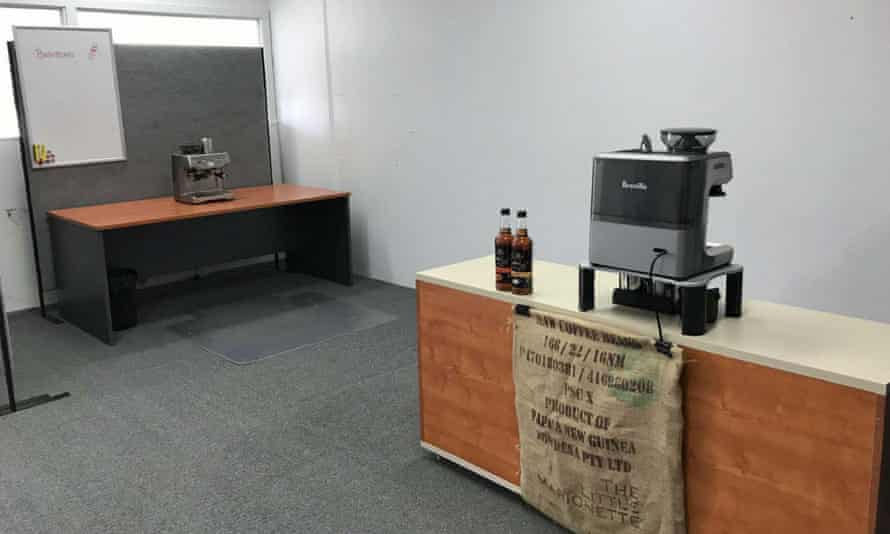 A photo Mzia took of the BusyBeans site which she sent to AimBig management. Photograph: Disability royal commission

This meant the participants – who were autistic or had moderate intellectual disabilities – would be “stuck in the office five hours a day, three days a week, just standing in the front of the Breville machine”, the hearing was told.

And it heard there were no documents or training manuals to outline how BusyBeans would train participants – people on the autism spectrum and with “moderate” intellectual disability.

That was until November 2019, when Rehab Management adopted materials Mzia had created herself.

Asked why there were no training documents, a AimBig senior manager, Matthew Ting, told the inquiry BusyBeans was intended to be “hands on” and “definitely not accredited training”.

Mzia told the royal commission she found the BusyBeans job herself but was asked to sign a form saying AimBig had found the job for her.

Later, she said she was asked to interview potential BusyBeans participants from AimBig’s caseload of jobseekers. And she alleged she felt pressured into putting them forward even if they were not suitable.

The inquiry heard the company did not believe there was a conflict of interest between these roles as employment agency and employer.

Fronting the commission on its third day of hearing on Friday, Marcella Romero, the chief executive of Arriba Group, the holding company for AimBig and Rehab Management, apologised to Mzia.

“We did not live our ‘people’ value in that instance,” she said.

Romero said in a media statement that the program had placed “people with a disability into stable ongoing employment” and that she was “proud” of its results.

“I acknowledge that BusyBeans program experienced certain challenges in the early stages of the program,” she said.

“We will continue to take the feedback from participants onboard and continue to make improvements to the program, which will include appropriately considering how to implement any recommendations that may emerge from the disability royal commission.”

Romero said the company would “hope to explore how we may be able to re-establish the program in future”.

Despite the free flow of government payments, Ting said the BusyBeans program lost the company money.

Romero noted BusyBeans employees were paid “real” wages, unlike so-called “sheltered workshops”, known as Australian Disability Enterprises, where people with disability can legally be paid a few dollars an hour.

Ting also disputed that workers were generally let go after 26 weeks, a key benchmark that triggers a substantial government payment.

He pointed to one AimBig promotional video showing a “cafe” set-up, which he said showed the program had expanded and improved, compared with the situation at Mzia’s site. Other promotional material available online shows trainees using commercial coffee machines.

Despite her complaints, the situation was vastly different at Mzia’s “coffee school”, the inquiry heard.

She told the inquiry that participants would need to carry a bucket of hot water across the office space to a kitchenette because the coffee training area did not have a sink.

In October 2019, Mzia was found to need three months of stress leave by her doctor.

She briefly returned to work in January, but said she quit in March 2020 after her requests for a position description were not met.

“The uncertainty was impacting my health,” she said.

Shortly after, BusyBeans was suspended due to Covid.

Mzia told the royal commission the experience had left her with a “broken heart” and a “broken life”.

“I do not want anyone to go through an abusive, badly structured system of Centrelink and … job providers and these companies that say they are going to support people with disability,” she said.

“Because what you see on the outside, I tell you, is not what’s happening on the inside.”

Mzia is a pseudonym provided by the royal commission.