Catherine Fielke describes trying to get funding for her five-year-old son through the National Disability Insurance Scheme (NDIS) as "a constant battle".

The Fielke family live in a small mining town called Nhulunbuy, about 1,000 kilometres east of Darwin.

At the time of Mitchell's diagnosis, Ms Fielke said Nhulunbuy didn't have the services to meet his needs, so they started travelling to Sydney for intense therapy. Nhulunbuy is home for Catherine, Brad and Jackson, 8, and Mitchell, 5, Fielke.(Supplied: Catherine Fielke)

The family had planned to travel to Sydney eight times across 2020 and 2021, but border closures and COVID-19 lockdowns meant they only managed two trips.

This inability to travel meant they underspent on Mitchell's NDIS plan.

And when Mitchell's plan came up for review in April, Ms Fielke said she was "horrified" to discover their funding had been slashed.

"We got a third of what we had last year; it didn't even cover the quotes that we had put in for our local therapist," Ms Fielke said.

"It was absolutely heartbreaking."

Annie Rily, chair of the NT division of the National Disability Services, said although she wasn't familiar with Mitchell's specific case, she knew other families experiencing similar issues.

"I know of many cases where services have been cut quite significantly," she said.

"Cuts to services for NDIS participants is something that we as service providers are very, very concerned about."

And Ms Rily said not all participants had the ability – or health literacy – to fight the system.

"Close to 49 per cent of the participants in the Northern Territory are Indigenous and 25 per cent are from a culturally or linguistically diverse background," she said.

"Those populations find it significantly more difficult to navigate the NDIS system." Behind the fight to get help for a Territory toddler 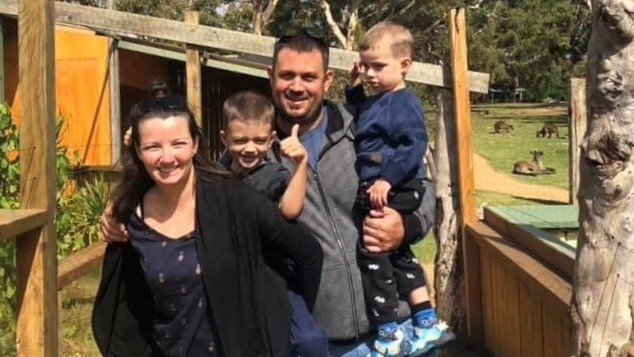 Although he suffers from autism spectrum disorder as well as global developmental delay, applications to the National Disability Insurance Agency were initially rejected.

"There are a number of people who are inpatients at Royal Darwin and Palmerston hospitals at the moment who have been deemed eligible for a NDIS package, but they haven't been able to access the funding to be able to be discharged from hospital," Ms Rily said.

Australasian College for Emergency Medicine president John Bonning said in some areas, EDs were the only place available for patients who lived in communities without specialist support.

"This does not just occur in the NT, but across Australia, with the worst effects being felt in rural and regional areas," he said.

A spokeswoman for the National Disability Insurance Agency (NDIA) – which delivers the NDIS – acknowledged the "historical challenges" faced by participants in rural and remote areas in accessing a range of services.

But the spokeswoman said the agency was "committed to delivering a consistent and quality experience for participants", no matter where they lived.

And although she couldn't comment on Mitchell's specific case, the spokeswoman said a participant’s plan funding could change for a range of reasons, such as starting school. She said anyone who believed an NDIA decision may be wrong could request a review.

That's the process Ms Fielke is now going through.

She requested a review in April (which meant hiring a lawyer and obtaining further medical reports) and was told in August that Mitchell's plan would be reviewed.

"In that time, we've used up a lot of our funding already that was given to us, and that funding was meant to last a year," she said.

"The stress of having to fight for something that you've already fought for … it's exhausting."