The number of students with disabilities in the public education system is predicted to grow by 50 per cent in the decade to 2027, and they will need twice as many specialist teachers and thousands more support classrooms.

Six new special needs schools will also have to be built every year if diagnosis and enrolment rates continue and policy settings do not change, modelling by Boston Consulting Group (BCG) for the NSW Department of Education found.

The confidential report, obtained under freedom of information laws, prompted mental health experts to call for a major investment in disability support staff, training and resources for schools, saying teachers are not equipped to respond.

But a spokesman for the department said the BCG analysis was a working document rather than a final report, and had been commissioned to inform the 2018 disability strategy. Some of its data definitions did not align with the department's.

"Significant progress has been made ... to improve the experiences and outcomes of students with a disability," he said.

The number of students with autism in NSW state schools has been growing by almost 15 per cent per year. Vicki Gibbs from Autism Spectrum Australia (Aspect) said diagnosis rates in children have climbed since the late 2000s when criteria changed and awareness grew.

She believed growth would slow, although psychology professor Ian Hickie disagreed. "We are on the upswing of the curve of awareness of [neurodevelopmental problems in children]," Professor Hickie said. Rates of childhood anxiety and ADHD diagnoses were also rising.

Under a status quo scenario, the specialist teaching workforce would need to increase from 12,000 to between 19,000 and 23,000 in 2027, the BCG report said. However, such teachers were in short supply; only 56 per cent of learning and support roles in mainstream schools were filled permanently.

"The lower end of this range implies around six new SSPs would need to be built every year," the report said. But this need could be met in other ways, such as expanding existing SSPs or increasing their class sizes. More students could be moved into mainstream classes, it said.

In the past two years, the department has built two SSPs and is planning five more. This year, $75 million is being spent on integration projects in schools.

The president of the federation, Angelo Gavrielatos, said the number of students with a disability had already increased by 500 per cent since 2002.

"Teachers and principals are not adequately supported to meet the growing complexity of student needs," he said. 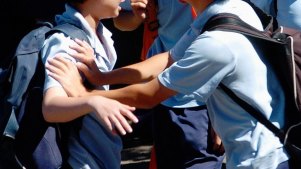 Professor Hickie said students with disabilities should be in mainstream schools where possible, but they needed significant support.

"The expectation is that teachers and normal classrooms will have capacity to respond," he said. "Without a lot of help, they won’t."

Professor Mark Dadds, a world-renowned expert in child behaviour disorders, said diagnosis rates were unlikely to go down. If children are taught in mainstream classrooms, each school should have in-house psychologists and behavioural experts.

"Schools are really really struggling with these kids," he said. "They don’t know how to manage these quite severe behaviour problems."

The department's spokesman said there were no plans to remove options for families, depending on their child's needs.