The father of an autistic teen bashed unconscious by up to eight men at the weekend has threatened to protest on the steps of Parliament over what the family perceives as government inaction on "gangs" in Melbourne's suburbs.

Jayden D'Abaco, 19, was chased and beaten in a "spontaneous" attack by the group, described as being African in appearance, as he walked alone to the Mynt Lounge nightclub in Werribee about 10.30 on Saturday night.

What was meant to be a fun night celebrating an unlikely victory by the Wyndham Suns reserves in a local AFL match ended with Jayden, from Tarneit, in hospital suffering a fractured cheekbone and severe bruising.

Police, who are appealing for CCTV footage and witnesses, have described it as a "cowardly .... spontaneous, opportunistic attack". 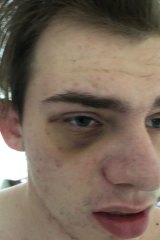 His distraught mother, Tess D'Abaco, said on Tuesday afternoon that Jayden hadn't left his room since being discharged from hospital later that night.

It is the second time the teen has been assaulted by a group of African Australian youths. In a highly publicised incident in April 2017, a group on a Tarneit bus demanded his runners and mobile phone before attacking him when he refused.

Ms D'Abaco said her son, who has difficulty socialising because of his autism, had made progress in developing his independence since that attack, but after the latest incident "he won't go anywhere by himself for a long time".

She said that her husband, Frank D'Abaco, still angry at the perceived "slap on the wrist" to the 2017 offenders, had threatened to sit on the steps of Parliament House on Wednesday in silent protest.

"They get a slap on the wrist and they're back out again. Family violence, they've cracked down on that now, why is it so different for these gangs? When they throw a punch, it's like they're holding a gun. They know they can kill someone," Ms D'Abaco said.

She also said she had been receiving texts from people offering to dispense their own form of vigilante justice against Jayden's attackers.

Asked by reporters on Tuesday afternoon about gang violence in the area, Senior Sergeant Samantha Ryan said police were aware of "incidents in Melbourne's north-western suburbs where groups of youths have got together, they've misbehaved, they have committed crimes and, occasionally, cowardly acts of violence".

She said community members had a right to move safely through their streets.

"We're doing everything within our power to identify these people and hold them to account to prevent this kind of violence from occurring," she said.

Police Minister Lisa Neville sent her thoughts to Jayden and his family.

"No one should be cowardly attacked or assaulted innocently going about their day or night," she said.

"This situation is under active investigation and I have full confidence that Victoria Police will bring the perpetrators to account."

Her office pointed to the Andrews Government's commitment to boost police numbers by 20 per cent by 2022  which, among several initiatives, included strengthening the Anti-Gangs Division.

Anyone with information about Jayden's attack, or CCTV footage, is urged to contact crimestoppers on 1800 333 000 or submit a confidential crime report online at www.crimestoppersvic.com.au.

An autistic teen who was bashed by African youths — for the second time in two years — has been left “broken” and refusing to speak.

Jayden D’Abaco, 19, had worked hard to get back the life he had before he was bashed on a Melbourne bus in 2017.

The bashing left the autistic teen from Tarneit, 25km west of the Melbourne CBD, struggling socially and afraid to go outside.

But through persistence and his mates at the local AFL football club he took back some control.

His father said Jayden is back at square one after being set upon by a group of youths described as African in appearance again while walking alone in Melbourne’s west on Saturday night.

“Jayden stays close to home. He only has a very small group of friends,” Frank D’Abaco told news.com.au today.

“So this, on Saturday night, has completely destroyed the boy. No-one will ever know what they’ve done to him mentally. 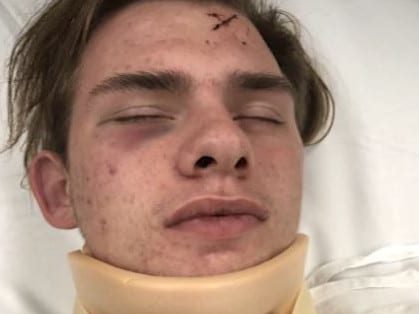 Jayden D'Abaco was bashed by a group of African youths on Saturday night.Source:Supplied

“He won’t leave his room. He hasn’t left his room since Sunday. He won’t speak. He won’t do anything.

“It’s happened to him twice and he’s broken”.

Jayden was attacked by eight men, described as being in their 20s, while walking to a nightclub to see friends.

He saw the group following him and, when he began walking faster, they ran towards him.

His father says he was punched and kicked, had a shard of glass dug into his forehead and was choked. His injuries include a fractured eye socket and significant bruising, but there are mental scars too.

Frank sat on the steps of Melbourne’s Parliament House dejected this morning. From 8am he waited for the chance to speak directly to Premier Daniel Andrews about an issue he believes the Victorian leader is ignoring.

“This guy doesn’t care,” he said, pointing towards Parliament House.

“When I speak, I speak on behalf of my family and all Victorians. This is not about me. This is about all of us. Your son, daughter, anybody.

“Every day of the week, Dan Andrews will tell you the crime rate is down. But the severity of the crime is through the roof and he won’t deal with it. Doesn’t want to know about it.”

Frank D’Abaco, whose autistic son was bashed by a group of African youths on Saturday night, says the 19yo won’t come out of his room. “He’s broken,” he told @newscomauHQ pic.twitter.com/LIk3WN7pXb

He said he was “disgusted” by the way Mr Andrews had put the issue of youth crime on the shelf.

Mr Andrews last year committed to tackling youth crime in Victoria and to work closely with the African community in relation to incidents of violence committed by African youths.

But he lashed out at Home Affairs Minister Peter Dutton when the federal MP suggested Melburnians were too scared to go to restaurants at night.

Victoria’s Shadow Minister for Police, David Southwick, told news.com.au the problem is real and it is time Mr Andrews dealt with it properly.

“I think, firstly, what’s happened to Jayden is horrific. It’s something that should never happen on our streets, but unfortunately it is.

“We do have a gang problem in Victoria and there is not enough being done by the Andrews Labor Government to address this.”

Mr Southwick said he wants to see more police patrols to prevent attacks like the one on Saturday night from happening again. Police say they are following leads but have not made any arrests at this stage.

“He was chased by them for a short time, and was subsequently assaulted by them.”

She said it was a “cowardly attack” and one that was “spontaneous” and “opportunistic”.

The attack has left Jayden and his family asking why they were targeted not once but twice.