Preparing kids for life after school is tough. When your child has autism, it can be overwhelming 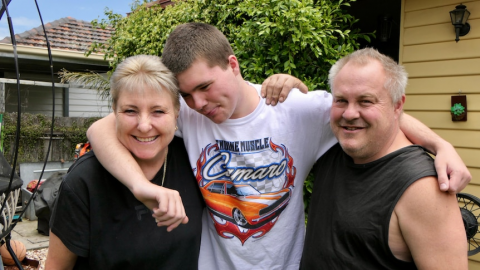 Eighteen-year-old Jake Course's life has been built around routines and familiarity.

Every day, it's toasted cheese sandwiches and raisin toast. The Wiggles and Thomas the Tank Engine. Tinkering with his dad's hot rod cars, building with Lego, and attending the Sunshine Special Developmental School in Melbourne's west.

This month, he will complete Year 12, and the school bus which has been picking him up and dropping him home for the last 13 years will come no more.

His mother Melissa Boyd has been dreading that day.

"It'll be a big adjustment for him. Very, very big."

It will be a wrench for his mum too.

"It is scary. You can try to prepare yourself for it, mentally, but you can't, I think, until it finally happens," she said.

These are common concerns for parents of school leavers, but when the child in question lives with disability, the fears are even more acute.

Jake lives with autism and an intellectual disability and was diagnosed around the age of two.

He has limited verbal skills but can communicate some of his needs.

"He is very independent minded. He is kind, he is loving. Not a great big communicator, but enough to be able to get his point across. He is a gentle giant."

The pandemic has disrupted Jake's preparations for life after school.(Supplied)

Jake turned 18 at a time when less than half (48 per cent) of all adults in Australia with disability had a job, according to a 2020 report from the Australian Institute of Health and Welfare.

The same report found 47 per cent of people with disability had experienced violence after the age of 15, compared to 36 per cent for the rest of the population.

A third of Australian adults with disability experienced high to very high levels of psychological distress, about four times the rate for those without disabilities.

Less than a quarter enjoyed what is considered very good or excellent health.

With statistics like that, it's little wonder Ms Boyd talks about feeling "grief" as she prepares Jake for the "big, bad old world" after the comparatively safe and secure school environment.

This year, Ms Boyd has kept a video diary, recording her hopes, fears and frustrations as she prepares Jake for what she calls "the next big, big, big step".

She remembers feeling overwhelmed when Jake was first diagnosed around 16 years ago.

"You're sort of thrown in, you know, I didn't know anyone that had a child with autism, there were no iPads, there was no social media," she said.

"So you sort of feel quite isolated."

Melissa Boyd knows life after school will be a big change for her son.(Supplied)

That feeling of being "thrown in" has returned during Jake's final year at school.

"It's not spoken about a lot. Lots of young children are getting diagnosed with autism especially," she said.

"I think it's important for people to know that these are the steps that parents and their teens need to go through. It's not easy."

Jake has learnt lots about change in life during the COVID-19 pandemic.(ABC News: Patrick Rocca)

While Jake was completing his final year of school, Ms Boyd was busy researching options for day programs he could attend next year.

"Jake doesn't have the capacity to be able to go off on his own. He needs to have support," Ms Boyd said.

But, as she soon discovered, the quality of these centres varies.

"It's quite confronting when you go and look at these places," she said after touring a few centres in June.

"The buildings are old. Coming from a school which is bright, it's stimulating. When I walked into one it was like a kick in the guts, I thought, 'Oh, I can't picture Jake here'."

And then, of course, there have been the lockdowns. All six of them.

But none of that has been possible because of COVID restrictions.

Routines help Jake find calm, and there are many activities he enjoys doing like working on cardboard.(ABC News: Patrick Rocca)

Like some people with autism, Jake is prone to overstimulation, and everyday situations can trigger great distress.

"If I've taken Jake into a shop and the light might be flickering, there might be background noise, he can go into a sensory overload, he starts vocalising, he can potentially drop to the floor and stop moving, he needs time and space to process everything," Ms Boyd said.

"He loves routines ... They help him stay regulated."

Remote learning was also a difficult time for the family.

After lobbying from various advocacy groups, the Victorian government changed its approach during the 2021 lockdowns, allowing students with disabilities to attend school even if their parents were not deemed essential workers.

But Ms Boyd fears the damage may already have been done.

"He missed out on a lot of learning, and he didn't have the opportunity to do work experience at all," she said.

Students with disabilities missing out

Anxiety, not autism is holding many children back, researchers say

Queensland researchers, who say anxiety is preventing many children on the autism spectrum from flourishing at school, are seeking families for a trial to reduce anxiety in pre-schoolers.
Read more

"Even before COVID, we know that many students with disabilities were not receiving adequate career support and advice," said Mary Sayers, chief executive of Children and Young People with Disability Australia (CYDA).

Ms Sayers said the pandemic only made things worse.

"Young people have told us that schools did not set the same learning activities during remote learning, and their academic performance was seen to count less than their peers, which is obviously very disturbing," she said.

Ms Boyd believes the public debate about lockdowns and their impact on students often ignored kids like her son.

"Every time they had it on the television, it was always about mainstream schools," she said.

"The disability sector is a minority to a lot of people, but it's our life. I just felt that they weren't really thought about at all.

Ms Boyd's diary has recorded Jake ordering and paying for prescriptions at a pharmacy, riding a jet ski, swimming breaststroke, and enjoying weekend getaways with his parents.

In May, Melissa Boyd and her husband Mark realised a 13 year dream: they took Jake on an aeroplane.(Supplied)

There were plenty of times, some not that long ago, when the prospect of Jake doing or enjoying any of those activities seemed remote.

He didn't start speaking until primary school. In May, between Melbourne's third and fourth lockdowns, the family realised a 13-year-dream: they took Jake on an aeroplane.

The family had attempted a flight once before when Jake was four, but never made it off the tarmac.

This year, they made it to the Gold Coast, where Jake had a "wonderful time" exploring the theme parks.

But his mum said she had always noticed progress and development.

"As bad as COVID was, it did teach Jake that a lot of things change in life," she said.

"He's been thrown a lot. And I think, well, if you can deal with that, there's a lot that you can do that we probably don't even know about."

Jake celebrated his graduation from Sunshine Special Developmental School with his parents.(Supplied)

Jake turned 18 on the same day as his graduation ceremony.

He celebrated by taking a guitar-shaped Piñata to school and smashing it up with his classmates.

His grandmother then walked him down the red carpet at the ceremony to receive his graduation certificate.

"It was a helluva day. It was beautiful," Ms Boyd said.

"And after he came back off the stage with his certificate and a teddy bear, he said, 'school finished mum, let's go home'."