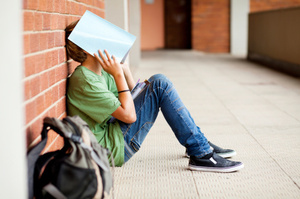 The recent case of a 14-year-old with Asperger's syndrome excluded from his school has highlighted that teachers are not being taught how to deal with students with Autism Spectrum Disorder.

An Auckland mother says her daughter, who has autism, will stay in her special needs school until teachers receive that training.

But the head of Victoria University's education faculty said it was unlikely the course could squeeze in specific autism training for the teachers.

Auckland mother Tanya Catterall said that based on that frequency, it was imperative teachers were better qualified to cope with children with autism when they'll inevitably need to teach some in their classrooms.

The school hit headlines last month when a judge quashed its decision to exclude a 14-year-old Asperger's student who had had an argument with a teacher.

The judge found the school made insufficient inquiries to access appropriate resources to cope with the student's problems and the behaviours that led to the boy's suspension.

The school disagreed and said the decision to exclude the student was motivated by concerns around safety in the learning environment.

Ms Catterall said she felt for the student and the school, which was in a difficult position, but there was "no way" Maya would move across to the school while teachers were not trained properly to deal with pupils with autism.

"She deserves so much better. She won't be going there in the near future," Ms Catterall said.

"To this day I'm very astounded that teachers are going through training college with no knowledge of autism."

"They [trainee teachers] have some exposure in the limited time they've got in that one year to develop an approach to deal with diversity and not just special needs, but with different cultures."

It would be a "tough call" to introduce a course dealing specifically with autism because the programme needed to fit in a range of topics. But schools should always ensure they had resources to bring in specialists to deal with children with autism, he said.

The majority of children in mainstream schooling were in the "middle range" of the autism spectrum and they were the ones that often struggled to get support such as teacher aides, Mr Dougan said.

Rawiri Brell, the Education Ministry's deputy secretary for early years, parents and whanau, said most teaching undergraduates were expected to be able to teach all students.

There were also specialists that could be brought in to help schools with students with special needs, he said.

"Finally, by the end of this year, readily available information will be available for all teachers through a web-based 'knowledge centre' on specific special education topics and impairments, such as autism."

- the exact cause or causes is/are still unknown;

- autism affects four times as many boys as girls; and

- Asperger's syndrome affects nine times as many boys as girls.