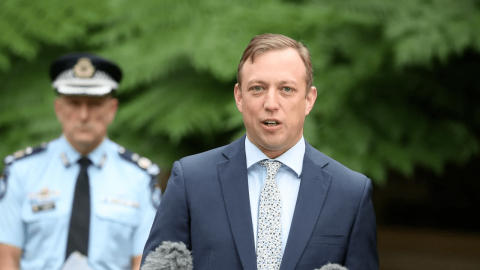 But the victory appears largely symbolic, with Health Minister Steven Miles forced by a medical revolt to tighten the only contentious part of the bill in order to try to ensure it does not endanger proper care of under-18s with gender identity issues.

On Thursday Queensland’s parliament voted 47-41 for an amended bill imposing up to 18 months in prison for any health professionals who use therapy to seek to change a patient’s sexual orientation or gender identity.

Dr Miles said the legislation would “protect LGBTIQ individuals from health service providers” using harmful practices, and put up last-minute amendments to clarify what treatments would be criminalised as conversion therapy.

Queensland University law dean Patrick Parkinson, a critic of the original bill speaking in a personal capacity, welcomed the changes, pointing out they more sharply focused the law on unethical attempts to change same-sex attraction, a moot point because there is no good evidence of therapists doing this in today’s Australia.

But on the live issue of minors distressed about their biological sex, Professor Parkinson said the amended bill gave more leeway to the professional judgment of practitioners dealing with youth gender dysphoria (feeling “born in the wrong body”).

Earlier this year psychiatrists and doctors mobilised against the original bill — together with lawyers, Christians, women’s and lesbian groups — to protest that the very broad definition of conversion therapy might lead cautious practitioners to refuse to see under-18 patients with gender dysphoria.

The number of children and teenagers at the Queensland Children’s Hospital gender clinic almost doubled in 2019 to 611, an increase of 1,172 per cent since 2014, according to figures obtained under FOI legislation. Public documents show the clinic is aware of concerns about over-representation of autistic patients.

Asked whether the government had taken any steps to find out the causes of this dramatic surge in gender dysphoria, Mr Miles’s office said it was “unfortunately unable” to answer.

When Bailey comes down with a fever, Mary Anne rushes her to the hospital, where two doctors misgender her. Mary Anne firmly corrects them.

Misgendering is traumatic. This is one of the baseline ways cisgender people can show up for the trans people in their life pic.twitter.com/EyrenC5QDK
— Netflix (@netflix) July 23, 2020

In parliament, the health minister did not distinguish between sexual orientation and gender identity, saying conversion therapy viewed “LGBTIQ people as abnormal and urges them to change or suppress who they are — of course, no treatment or practice can change a person’s sexual attraction or experience of gender”.

He said the amended bill did not prohibit therapies based on evidence, nor promote any one approach to treatment.

The Queensland Council for LGBTI Health hailed the new law as sending “a clear message to Queenslanders that conversion therapy is harmful in all contexts”.

Labor MP Chris Whiting explained his support for the law by telling parliament the story of his “trans and queer” friend who was unhappy about his experiences with doctors.

“If he had got the right medical advice earlier, he said that he could have got hormones earlier and avoided a lot of the issues and problems around puberty,” Mr Whiting said.

The global campaign by the transgender lobby to rebadge “gay conversion therapy” as “LGBTQ conversion therapy” coincides with the rapid rise of children’s hospital clinics over the last decade offering medicalised “affirmation” of trans “gender identity” declared by minors.

Earlier, non-invasive approaches to gender issues, such as “watchful waiting”, have been labeled conversion therapy because of their caution about taking a trans declaration at face value. The affirmation model regards children as young as three years of age as “experts” on their inner gender identity, even when this is at odds with biological sex.

“Gay conversion therapy” traditionally referred to sometimes coercive and cruel attempts 40-plus years ago to “cure” same-sex attraction in adults, and critics of current usage of the term argue it simply does not apply to adolescent experimentation or confusion over gender roles.

Kiera Bell, 23, a regretful “detransitioner” who now accepts her female body, argues the policy promotes the “gender-affirming” medical treatment with testosterone and mastectomy that has damaged her health.

Fred Sargeant, a gay activist who was present at New York’s 1969 Stonewall riots and co-founded the first gay pride march, said “the vast majority of these children (in gender clinics would) resolve as lesbian or gay if allowed to grow up”.

He said the real conversion therapy was “transing LGB children” with drugs and surgery, adding that misuse of this taboo term by gender-affirming activists was an example of “the theft of language (which) is at the heart of what trans lobbyists do”.

The post-2000s rise of self-identified trans rights has split feminists as well as the LGBT community, with breakaway LGB groups forming in Australia, Brazil, Mexico, Norway, Spain and the UK in order to highlight the conflict between open-ended gender identity claims and same-sex attraction based on biology.

Before the gender clinic explosion, there was a very small number of mostly preschool boys with gender issues, and more than 60 per cent went on to embrace their biological sex as they matured with most coming out as gay or bisexual.

Case studies from the Queensland youth gender clinic include a 15-year-old biological male, who had collected high-heel shoes as a child, passed as female at school, and been referred for puberty blocker drugs and possibly the female hormone drug oestrogen.

But after three appointments, it emerged he had felt safer as female with his bullying father, and had now come to terms with being a boy, identified as gay or bisexual and went off all medications.

The Palaszczuk government’s bill stated that “affirmative” gender change, which can involve irreversible opposite-sex hormones and surgery to remove breasts or refashion genitals, did not fall within the definition of conversion therapy.

A psychologist who declined to be identified said that even without state legislative overreach, there were serious professional risks for practitioners who went public with scepticism about the dominant, medicalised “gender affirmation” model of the clinics.

The psychologist, whose 16-year-old daughter with Asperger’s syndrome had spent a year identifying as male, said the health system had to take a broader, more open approach.

“I want the gender clinics to offer family therapy and psychotherapy to see if greater self-acceptance (for young patients) is possible without irreversible medical intervention — and to celebrate self-acceptance when it happens,” she said.

“I also want them to provide information about the growing rate of regret (shown by the increasing number of former patients emerging as detransitioners).”

A progressive, she said “it just floors me” that others with a similar political and cultural outlook did not readily grasp the risks of medicalisation of gender non-conforming children.

Flinders University academic and queer theorist Damien Riggs, a leading figure in trans policy for the Australian Psychological Society, has advised pro-affirmation clinicians to consider alerting authorities to child “neglect” if other clinicians take a “less than affirming” approach to a young person identifying as trans.

Ever wondered how "trans inclusive" policies became so common so quickly and with so little debate? I've written about a document that explains the success of groups lobbying for trans rights. https://t.co/woK9ryeYBa pic.twitter.com/sB9hHWqjk1
— James Kirkup (@jameskirkup) December 2, 2019

He had found younger colleagues too fearful to express concerns about the medicalised approach to youth gender dysphoria, and felt they might see the new law as “an implicit threat” to their careers.

This might lead them, consciously or unconsciously, to do less exploration than necessary of “the broader clinical picture” of a young patient presenting with gender issues, Dr Breakey said.

The Australian Medical Association Queensland, the Royal Australian and New Zealand College of Psychiatrists, and the National Association of Practising Psychiatrists all welcomed the government’s attempt to clarify what it meant by conversion therapy. The pyschological society had no comment. Queensland’s Liberal National Party opposed the conversion therapy aspect of the bill as poorly drafted, citing the concerns of medical practitioners.