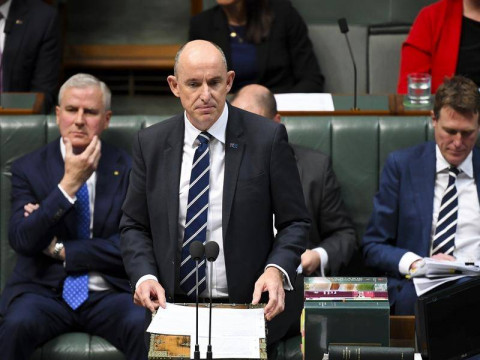 Participants in the national disability insurance scheme will keep receiving enough support despite its $4.6 billion underspend, the minister responsible insists.

The Morrison government revealed on Thursday the budget was almost out of deficit, thanks to less money going to the NDIS.

NDIS Minister Stuart Robert has defended the underspend, saying no participant had received less money as a result.

He said 100,000 participants "couldn't be found" or were counted twice, suggesting less money was now needed for the scheme.

Labor's NDIS spokesman Bill Shorten has spent the past 10 weeks travelling around the country holding forums seeking feedback from participants.

He's been horrified by experiences he's heard, including a nine-year-old boy whose family had to use a wheelbarrow because he was awaiting an NDIS-supported wheelchair.

Mr Shorten says the authority implementing the NDIS is "constipated" and offered to work with Mr Robert to make the scheme better.

"The decisions just aren't getting through, that's why the money isn't being spent," he told the lower house.

"We've got to do better. I know Labor didn't win the election, I'm very aware of that fact.

"I'm reminded every time I walk into question time, I get it.

Mr Shorten made the comments during debate on legislation to set up a national system to hold information about NDIS worker security checks.

The proposal passed federal parliament on Thursday and it will be created after the bill is officially rubber-stamped.

The government says it will keep people using the NDIS safer, as they won't be at risk from people who work closely with them

Although Labor supports the database as it will prevent future abuse, opposition MP Joanne Ryan argued it wouldn't be able to investigate crimes against participants that had already occurred.

Meanwhile, the long-awaited inquiry into the abuse, neglect and exploitation of Australians with disabilities has begun.

The first public session was held in Brisbane on Monday, after some of Australia's largest NDIS providers were sent letters warning they must cooperate.

Formal notices will soon follow, demanding details of any complaints or investigations into instances of violence, abuse, neglect or exploitation involving their clients.