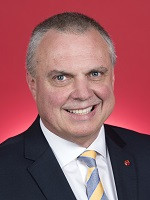 Following representation by the Australian Autism Alliance, Senators Griff (Centre Alliance) and Brown (Labor) moved the following motion in the Australian Senate. Hansard records that the Senate passed the motion on 2/4/2019.

Senator GRIFF (South Australia) (16:44): I wish to inform the chamber that Senator Brown will also sponsor this motion. I, and also on behalf of Senator Brown, move:

(i) in 2015, the Australian Bureau of Statistics reported that there were 164,000 Australians with an autism diagnosis and a prevalence rate of 2.8% for those aged between 5-14 years (around 81,000 children), though this does not reflect the large numbers of autistic adults who remain undiagnosed,

(iii) 29% of all NDIS participants have a primary diagnosis of autism, representing the largest diagnostic cohort in the scheme, and

(iv) waiting times for diagnosis in the public system can be between 12 months to two years;

(b) further notes that:

(i) between 40% to 70% of autistic people experience a co-occurring mental health condition,

(ii) international studies have found that autistic people have a life expectancy between 20 and 36 years shorter than the general population,

(iv) 35% of autistic students achieve Year 10 or below, compared with 17% of all students – only 6.5% have a Bachelor's degree or above, half the rate of all people with a disability, and

(v) autistic people and their families experience significant social isolation with 51.6% agreeing that they feel socially isolated and 39.3% agreeing that they sometimes feel unable to leave the house due to concerns about discriminatory or negative behaviours in the community;

(i) across Europe, a number of countries have developed national autism plans,

(ii) analysis has found that European countries which have a national autism plan or strategy appear to bring about a positive impact and change for autistic people, and

(iii) the Victorian Government inquiry into services for people with autism spectrum disorder recommended the development of a National Autism Strategy, highlighting the benefits, including:

(A) increasing understanding of autism in the community, and

(B) creating a common set of aims for policy makers, service providers, departments and agencies, noting that many of the issues faced by autistic people cut across Commonwealth and state responsibilities;

(e) encourages the Government to develop a National Autism Strategy, in partnership with autistic people and their families and carers, to determine a set of actions with measurable outcomes to improve the life outcomes of autistic people.