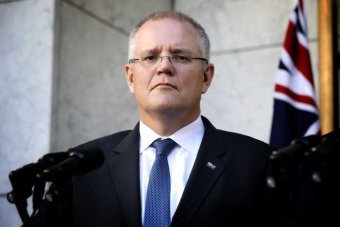 Prime Minister Scott Morrison has written to the states and territories asking for their support in establishing a joint inquiry into abuse in the disabled sector.

New South Wales, Victoria and South Australia have confirmed they are behind the probe, but a formal announcement is not expected until Mr Morrison hears back from the other leaders.

In his letter, Mr Morrison called on all governments to work together.

"I am now seeking your in-principle agreement for the establishment of a joint royal commission and the most appropriate consultation pathways to progress this important matter," he wrote.

The Prime Minister does not need the approval of the states and territories to call a royal commission, but has warned the scope would be limited without it, given services like health, mental health, education and justice can be regulated by the state.

Mr Morrison also asked leaders to sign up to a cost-sharing arrangement.

"I think we can all agree that violence, abuse and neglect of people with disability is abhorrent and that we should be doing all we can to ensure a safe and secure Australia," Mr Morrison wrote.

The step comes after the Prime Minister backed a motion supporting the inquiry in Federal Parliament in early February, under pressure from Labor and the Greens.

The Coalition came under significant criticism at the time, amid allegations they only supported the motion because they were afraid of losing another vote on the floor of Parliament.

Opposition Leader Bill Shorten also wrote to the states and territories, asking for their backing for the royal commission.

'We're looking forward to working with the Government'

"We are winning but we have not yet won. This has been a very long process," he said.

"For five years disabled people have been calling for a royal commission into this issue."

According to National Disability Services, people with a disability are 1.5 times more likely to experience abuse, neglect, violence and exploitation than people without a disability.

"We support a royal commission because we understand that people with disability, like everyone else in our community, have the right to live free of the fear of abuse or neglect," chief executive officer David Moody said.

Mr Morrison has repeatedly said he was never opposed to an inquiry, but this is the first time he has expressly supported the matter.

Shadow Social Services Minister Linda Burney said the Prime Minister was shamed into agreeing to the inquiry against his will and now wanted to shift the cost.

"It’s a cheapskate move to try and offload the cost of this royal commission to the states," she said.

The Disabled People's Organisations Australia said a probe into the sector was well overdue.

"We're looking forward to working with the Federal Government to make the terms of reference inclusive of all people with disability," Therese Sands from People with Disability Australia said.

The organisation implored the Federal Government to make sure people with a disability are provided with extra services like counselling or legal advice so they can properly participate in the process.

The Coalition Government has called five royal commissions during its past two terms in office, including inquiries into the trade union movement, Labor's home insulation program, youth detention in the Northern Territory, banking misconduct and aged care.

A royal commission into the abuse of disabled Australians will be of the “same size and standing” as the four-year, $372 million ­inquiry into institutional child-sex abuse, Scott Morrison says.

States have now lent their in-principle support to a royal commissio­n, but the Prime Ministe­r has been attacked for asking them to consider “cost-sharing arrangements”, which Greens senator Jordon Steele-John, who uses a wheelchair, says is “shifting the burden”.

Mr Morrison said yesterday the royal commission would cost far more than the $26m Bill Shorte­n had promised for an inquiry under a Labor government into abuse in the disability sector.

“It will be a royal commission of a similar size and standing to what we saw with institutional child sexual abuse. Let’s remember, that went for four years, it had five commissioners,” the Prime Minister said.

“The Leader of the Opposition said he could do it for $26m. I don’t know what royal commission­ he was thinking of, but it was clearly not one he had properly thought through.

“Let’s get the terms of reference right and set it up so it’s above politics.

“Today is a win, but not the win … we need a broad terms of reference soon,” he said.

“It’s frankly ridiculous the Prime Minister is looking for money from the states. This is the usual shifting of the burden people­ with disabilities face every day from government.

“It’s not just abuse that happened­ in state institutions. There’s the abuse that’s happened through the NDIS, in the sheltered workshop programs. These are federal programs.”

Opposition social services spokeswoman Linda Burney said the government could not “offload the costs” of the disability abuse inquiry.

“In a cheapskate move, we see he plans to offload the cost of this royal commission to the states,” Ms Burney said.

“Scott Morrison can always seem to find the money for the top end of town — why can’t he find it for a proper inquiry into the abuse of people with disability?

“People with disability, their families, advocates, and repre­sent­­ative organisations, have fought for this royal commission — they deserve a government who takes it seriously.”

Prime Minister Scott Morrison will order a royal commission into horrific allegations of abuse against people with disability in what will be the sixth judicial probe in Australia in as many years.

In a letter to the nation's premiers and chief ministers, Mr Morrison for the first time confirmed he believes a joint royal commission is the best way to get to the bottom of allegations about the treatment of people with disability.

"I think we can all agree that violence, abuse and neglect of people with disability is abhorrent and that we should be doing all we can to ensure a safe and secure Australia," Mr Morrison wrote.

"It is crucial that all governments work closely and collaboratively to ensure a holistic response to this issue. Accordingly, I am now seeking your in-principle agreement for the establishment of a joint royal commission and the most appropriate consultation pathways to progress this important matter."

A Greens motion to establish the royal commission passed the Senate in early February despite opposition or resistance from some Coalition members. The government supported the motion when it reached the House of Representatives last week but Mr Morrison warned input from the states would be needed because the Commonwealth has limited jurisdiction.

Labor and the Greens accused Mr Morrison of belatedly backing the idea because the government risked losing another vote on the floor of Parliament, but the Prime Minister said "at no time" had he ever said he was opposed to an inquiry.

Cabinet met in Sydney on Tuesday night but a formal announcement is not expected until feedback is provided by other states.

In his letter to premiers, Mr Morrison also raised the prospect of "any cost sharing arrangements that may be appropriate" - a reference some state leaders believe is an early request to help foot the bill.

Mr Morrison also recently met with Disability Commissioner Alastair McEwin to discuss terms of reference and to get ideas on how Australians with disabilities could best share their stories with the inquiry.

Since coming to power in 2013, the Coalition has ordered royal commissions into trade union governance and corruption, Labor's home insulation program, the banking and financial services sector, youth detention in the Northern Territory, and the aged care sector.

Opposition Leader Bill Shorten had pledged $26 million to hold the disability royal commission should Labor win the May election but is prepared to spend more if needed.

"We have to recognise that while ever we are a nation who devalues people with disability, then we will never actually get to the root cause of violence and the prevention of violence, abuse and neglect," Mr Shorten said last week.

Labor first called for the inquiry in 2017.

Senator Jordon Steele-John delivers an impassioned speech naming those who died in an institutional and residential setting. "I will not rest until they find the justice that is so desperately owed them," he said breaking down in tears.

Mr Morrison said state co-operation was needed because "the scope being proposed by people with disabilities and their advocates is broad", and health, mental health, education, justice and education services were regulated by the states prior to the establishment of the National Disability Insurance Scheme.

He also asked the state leaders to provide views on how to make sure people with a disability are provided with appropriate support.

While national statistics are rarely collated, advocates say people with disability are 1.5 times more likely to experience abuse, neglect, violence and exploitation than people without a disability.

"We support a royal commission because we understand that people with disability, like everyone else in our community, have the right to live free of the fear of abuse or neglect," said National Disability Services acting chief executive David Moody.