Art was Tim Sharp’s way of communicating as a child; now it’s inspiration for a joyful 90 minutes of puppetry, live music, animation and dad jokes

Laser Beak Man is a character that appears in the vast majority of Sharp’s art. Photograph: Supplied: Brisbane festival

Tim Sharp takes things literally. Consider the term “flat white”. Most of us would imagine our morning coffee, perhaps being served to us by a bearded barista. Sharp, however, sees a steamroller and a rather unfortunate Anglo person.

Sharp is an artist with autism, who communicates his unique perspective on the world through quirky, hilarious and colourful drawings. The words “Virgin Mobile”, for example, see cherubic young men and women spinning from a ceiling fan. The hymn Then Sings My Soul translates to a shoe opening like a mouth, spewing forth music. And a figure standing in front of a bright green crop of footballs, soccer balls, tennis balls with a watering can – well, if you have trouble with that one, click here.

Sharp’s artwork and characters are the inspiration behind the play Laser Beak Man, currently showing as part of Brisbane festival and named for a character he created when he was 11 years old. It is a joyful 90 minutes of puppetry, live music, floating helium-and-battery-powered orbs, and animation rendered in the bright crayon colours of Sharp’s drawings. 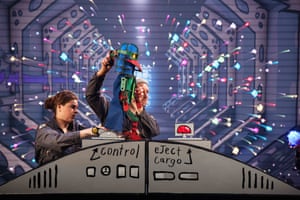 The play is one of myriad successes for Sharp – a cheerful, warm-hearted 29-year-old who can count among his achievements having his work exhibited internationally; inspiring an eight-part animated series shown on Cartoon Network; being the subject of numerous documentaries and a book, Double Shot of Happiness; and regularly appearing as a motivational speaker with his mother, Judy, including at Tedx Australia in 2014.

His story is in many ways a shared one: Judy has been his full-time carer and his champion from the very beginning – a pivotal moment being when a specialist diagnosed him with autism at age three. The specialist told Judy that Sharp would never be able to talk or go to school or even feel anything for her, and recommended he be put into an institution. Judy rejected the idea, and poured her energy into caring for Sharp herself.

These days, while he still requires full-time care, Tim’s language skills and his ability to communicate are a far cry from that bleak diagnosis. A turning point came when Sharp watched his mother drawing stick figures. It took another year before he began drawing himself, but once he picked up the pencil, his verbal skills increased rapidly. Art became his way of communicating. Then, at the age of 16, he was one of four young people from around the world selected to take part in the Very Special Arts festival for people with disabilities. The festival was in Washington DC; Judy mortgaged their house in order to fly the family over, and a crew from ABC’s Australian Story followed.

Since then, Sharp’s profile has only grown.

“Me and Mum, we are a really good team,” Sharp tells Guardian Australia. “We love each other, we’re nice to each other, we like hanging out, we always help and do lots of cool things together. And we are happy at home.” 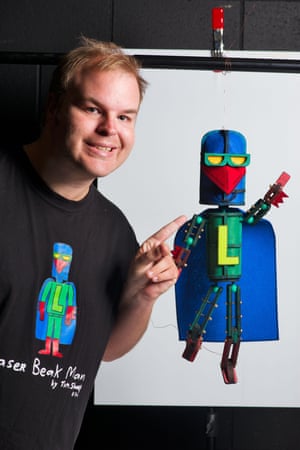 Laser Beak Man is a character that appears in the vast majority of Sharp’s art, and one of his earliest creations – originally devised for a birthday card. (Laser Beak Man’s birthday greeting? “Have a filthy disgusting birthday.”)

“He’s a good guy and he’s a superhero,” Sharp says. And every superhero must have a superpower: “He has a laser in his beak that turns people from bad to good.”

David Morton, creative director of Dead Puppet Society, first came across Sharp’s distinctive illustrations after they appeared on traffic light control boxes around Brisbane as part of a public art project. A serendipitous meeting at Brisbane’s Powerhouse arts centre in 2013 resulted in a collaboration.

“All of the key characters and the scenes, the set-ups, are all directly lifted from Tim’s work,” Morton explains.

When they first started working on the project, Morton and Dead Puppet Society executive producer Nicholas Paine spent weeks carefully sifting through and analysing over 400 pieces of Sharp’s art.

“Characters kept recurring across images,” Morton explains. “Even though there was no explicit story as to why they do, we were like, there’s some logic here; we’ve got to find out what that is.”

As it turned out, Sharp had a lot of information to impart – particularly about the characters of Laser Beak Man and his nemeses, Peter Bartman and Evil Emily, who would become the main characters of the script for the stage show.

“Tim was telling us about how the characters all met and where they all came from and what their hopes and dreams were and how they sounded … he was very aware of what their backstory was and who they were,” says Morton. 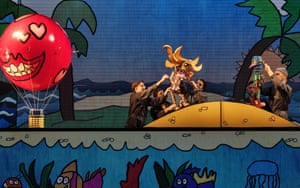 The clarity of Sharp’s vision made translating his art for the stage a very smooth process. Photograph: Dylan Evans Photography/Supplied: Brisbane Festival

The clarity of Sharp’s vision made the process of translating it run smoothly for the creative team – although Morton stresses that this was also because they agreed to put no major time constraints on the project.

“We were so aware of wanting to make sure that everything was authentic to Tim’s world and to make sure we weren’t ever pushing him to deliver on something to please us – that he shouldn’t feel constrained by that,” Morton says.

Four years later, the show is delighting crowds of all ages – a cross-generational appeal Morton says was key for their development of the story. “This misconception that comes up a lot with Tim’s work is that it is for kids. And the humour in it absolutely isn’t. The puns and dad jokes that it’s riddled with – I think that they really resonate with an older audience. So we wanted to try and capture both.”

A selection of Sharp’s drawings is currently hanging in the foyer of the Roundhouse theatre in Kelvin Grove, Brisbane, where Laser Beak Man is showing. Brisbane is Sharp’s home town, so it’s fitting that it’s the location of the show’s premiere season. Sharp attends every performance, and especially loves the songs – written by Sam Cromack of Ball Park Music, who performs live with band members – and the giant robot puppet that appears about halfway through.

He hopes, more than anything, that the show will make audiences happy, because: “Making art – it makes me happy.”