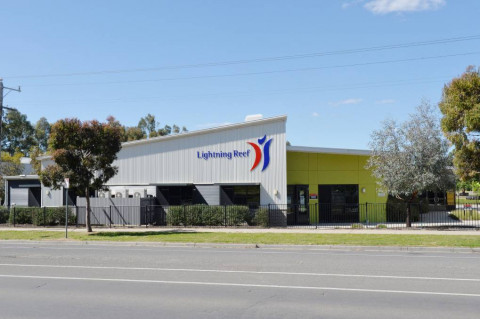 Parents are outraged children with special or behavioural needs at Lightning Reef Primary School have been put into a new “naughty-naughty classroom” and can no longer have play breaks with other students.

The parents say their children were exposed to violence when the new arrangements started this week.

At least one family has withdrawn their daughter from the school, saying she was “too scared” to return to the classroom.

The girl’s father, Paul Rhodes, said the students were moved into a “foyer area” between the school canteen and basketball gym which they had since dubbed the “naughty-naughty classroom”.

Mr Rhodes said his daughter, who is in grade 4, reported spitting, fighting and swearing on her first day in the new classroom, which included students from multiple year levels.

“It really put her on the back foot, she was really distressed about it and too scared to actually go back there,” he said.

“She didn't stop talking about it all that night and all the next morning, she clearly didn’t want to go back into that classroom.”

Mr Rhodes said the 10-year-old was so affected by the experience, he withdrew her from Lightning Reef the next day, saying he was “disgusted” with the way the school handled his concerns.

“We went in Tuesday morning and they didn’t fix the problem so she came home with us that very morning,” he said.

“We weren’t going to argue, we just pulled her straight out. It’s a shame because her siblings are older than her and they’ve all gone through there.”

Another parent, who did not want to be named, said her son had come home from school with a bruise to his face after another child assaulted him in the new classroom.

She said her son, who has ADHD and autism, had lost two years of progress almost overnight since being moved to the new class.

“I had him home [on Wednesday] because of the public holiday and the behaviours that have been exposed to him in the last two days we’re now seeing at home,” she said.

“I’ve had a family support worker work with me over the last six to eight months and was ready to close our file on help and support – she came [on Wednesday] and went ‘oh my God, he’s gone backwards.”

The boy’s mother said he had learnt to control his behaviour by removing himself from stressful situations and finding a quiet area, but she was told that would no longer be possible.

“There is a spot but the other day there was five other children in there, all talking, throwing balls around in the area where he could go and read,” she said.

“He used to last year have a tent and blankets and pillows where he could go to – he’s got none of that.

“It’s an unsafe environment for teachers and students to work in, physically, mentally and emotionally.”

She said her son now felt isolated from other students by the new lunchtime and recess timetables and that the school was “picking on him”.

“They’ve got clear glass windows so when the other kids go out to play these children see the other children,” she said.

“All they want to do is go out and play with their mates.”

Lightning Reef principal Julie Hommelhoff said the school took the safety and education of its students seriously and worked hard to meet the needs of all of them.

“As part of this we have created, in consultation with staff, parents and the school council, a new class so we can better work with students at risk of disengaging from education,” she said.

“It has been running a specially designed program with the aim of helping these students get the most from school and re-engage them with their learning.

“We are keen to work with parents to support the educational needs of all of our students.”

Parents were first informed of the new arrangement via a letter sent home with students on October 6, which described a new “learning community” that would offer “educational programs pertinent to individual student’s [sic] needs”.

“This exciting proposal will implement programs such as literacy and numeracy based learning, Art and H&PE based on the Victorian Curriculum,” it reads.

“It will build in routines and ecological learning producing quality of life outcomes and fundamental skills that will provide the basis for interacting with people.”

Mr Rhodes has since lodged a complaint about the new arrangement with the Department of Education and Training.

“As I said to the education department, it’s none of our business anymore but someone needs to stand up for these other children,” he said.

“We’re talking about nine-year-old kids here, not high school, this is primary school.

“They should have just put their hand up and said ‘yeah, we made a big mistake’ and put all the kids back into their normal classroom the very next morning, not just ours, all of them.”

“We saw a fantastic example of this in the documentary series Revolution School where the Darrabi class supported students back into mainstream education, with one of them going on to be appointed a school captain,” he said.