Expecting Grace Tame To Smile Is Not Only Sexist, It’s Ableist In late 2019, about a year after I was diagnosed with autism, a media storm descended on then 16-year-old activist Greta Thunberg, accusing her of not smiling enough during an impassioned speech at the UN climate action summit. She was there, tirelessly campaigning against fossil fuel profiteers who are actively destroying the planet, which, of course, would’ve been a hoot. Most famously, conservative commentator Andrew Bolt labelled her “mentally ill” and “deeply disturbed”. Thunberg, at the time, was the only prominent public figure I was aware of who was both openly autistic and a girl, and, fresh to my diagnosis, the vitriol the media spat at her hit me hard.

Three years later, and history is repeating itself. Another prominent autistic activist, Grace Tame, this time a campaigner on behalf of sexual assault survivors, and a sexual assault survivor herself, is being condemned in the press for not smiling enough around powerful men. I hope the absurdity of such a condemnation isn’t lost here. 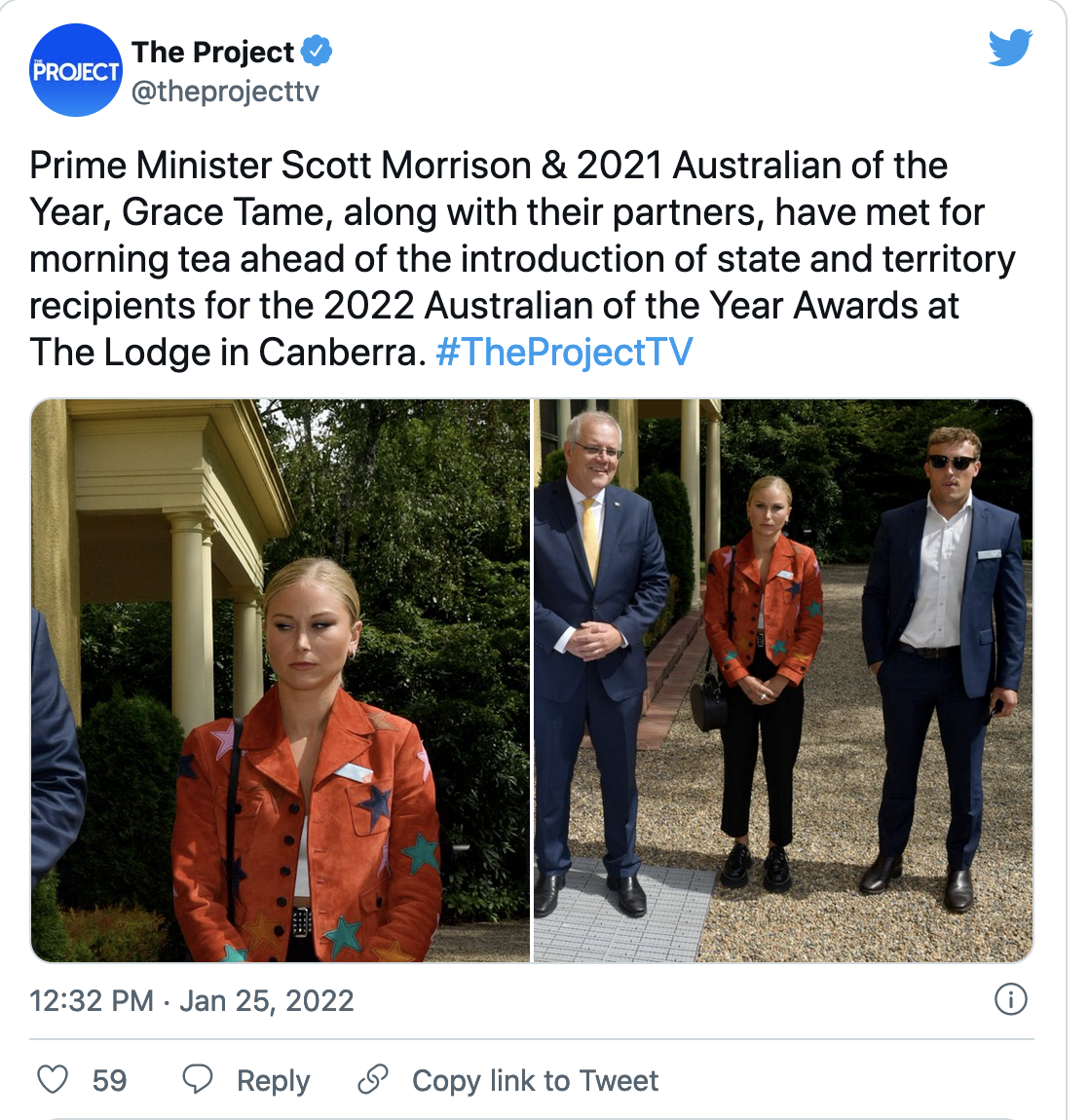 I’ve been following Tame for a while. It’s hard not to. She’s risen to staggering heights in a very short amount of time. In fact, the event she was attending where she didn’t smile enough was in honour of her passing the Australian of the Year baton over to someone new. As a sexual assault survivor myself, and an autistic woman, her work means a lot to me. Studies have shown that autistic women and girls are three times more likely to be targeted by abusers and sexual assault perpetrators. And one of the major cited reasons this statistic is so high is because we’re taught by society to repress our authentic feelings, to “mask” our behaviours, our pain, and our needs, so as not to make other people feel uncomfortable.

Personally, I’m a big smiler. In fact, one of my stims — which here means a repetitive behaviour used by autistic people to self-soothe — is to laugh. Yes, for me, laughter is literally the best medicine. I love to laugh when I’m overcome with happiness, but I will also laugh when I’m deeply uncomfortable and in distress. As you can imagine, this tendency is both a blessing and a curse. I’m a spectacular audience for all of my comedy writer friends. But I’m also, unfortunately, a hit with 46-year-old men who work in insurance but are looking to get into stand-up. 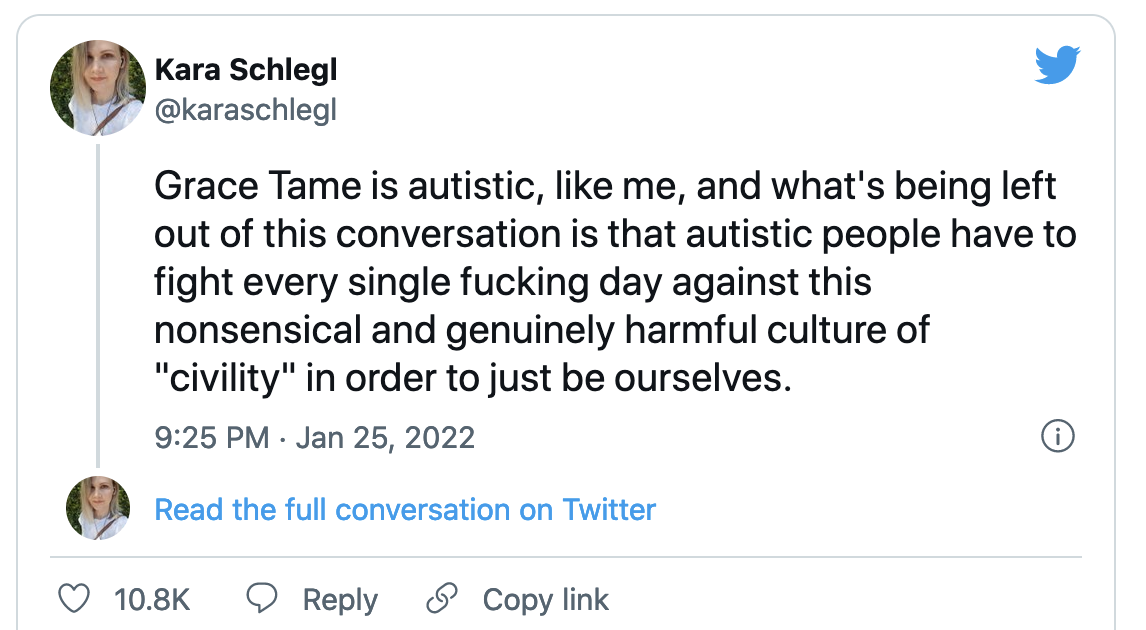 Back in Year 7, I was dumped from my friendship group by Marissa and Christina (real names), because I “laughed too much”, and it wasn’t until my diagnosis that I understood that they had dumped me for being autistic, that my stim was making them feel uncomfortable. After I’d been mercilessly emotionally crushed in the way only teenage girls know how to do, I did make a strong effort to stop myself laughing, to “mask” my behaviour, and became quite depressed as a result.

I now consider myself lucky that laughter is such a balm for me. But there is no doubt in my mind that people still think I’m weird for laughing as much as I do. One of my favourite openly autistic TikTokers, Rhylee Plassfield, who does “cursed cosplay”, where she’ll dress up as a cursed version of a famous character, has the same stim as me. Despite running a comedy account, and being outrageously talented and funny, she still cops daily messages from random strangers telling her that she “laughs too much”.

Being “too much” is, in “polite” society, considered a serious and punishable offence if you are a woman. Women are condemned for being too angry, too loud, too critical, too passionate, too spiteful, too stoic, I could keep going, but this list might already be too much for you. This is a serious problem for me, and for a lot of autistic women out there, because we are more naturally inclined to be all of these things, and more, especially when the situation calls for it. Like, say, when the world is ending due to excessive and unnecessary carbon emissions, or when women and girls are being sexually assaulted at unprecedented rates. Stuff like that.

That’s how I felt as an undiagnosed autistic woman, trying desperately to conform to society’s standards, while intensely believing those standards shouldn’t exist.

You’ll find that many autistic women are activists, and I think this is because we find it extremely difficult to quiet ourselves in the face of injustice, or to remain calm when we see others in distress. There are plenty of studies to back this up, with recent research suggesting autistic women struggle to even differentiate between someone else’s pain and their own. I’m friends with many young autistic women, and there isn’t one among them who hasn’t taken a principled stand, or challenged the status quo in some way, in order to help other people and make positive change. In fact, I’m probably the most selfish of the lot, choosing a career in comedy, which helps no one.

In my experience, we autistic women are largely a bunch of radicals and non-conformists. We usually live outside the lines of society, and we will look back and tell you if the picture society drew is ugly. There’s a line in my favourite Holiday rom-com, The Family Stone, where Luke Wilson turns to an extremely repressed Sarah Jessica Parker and says “you have a freak flag, you just don’t fly it”. That’s how I felt as an undiagnosed autistic woman, trying desperately to conform to society’s standards, while intensely believing those standards shouldn’t exist.

People have a tendency to view autism through a very grim lens. It reflects a wider problem with how society perceives disability in general, as something wrong, or something to fear. And on the other side of it — the more condescending side — well-intentioned people will overcompensate and start labelling us as having “superpowers”. This practice is embarrassing for all of us, and we should collectively decide never to do it again.

In my mind, a normal reaction to watching that situation unfold would be to say, ‘Yeah, of course she didn’t smile’.

Three days ago, during a photo-op, a young woman who campaigns to end sexual assault was asked to stand next to the Prime Minister, who, just last year, publicly refused to stand down a minister in his cabinet who had been accused of sexual assault. And this woman chose not to smile. In my mind, a normal reaction to watching that situation unfold would be to say, ‘Yeah, of course she didn’t smile’. Instead, this one moment has fuelled enough opinion pieces to line my birdcage for a month, and many of them say the same thing: the ego and feelings of one powerful man are more important than the dignity and perseverance of sexual assault survivors.

It’s clear that, for many people in Australia, Grace Tame’s choice to honestly express her feelings about Prime Minister Scott Morrison and what he stands for were too much. And personally, I’m glad, because I believe that it’s far better to do too much than not enough.