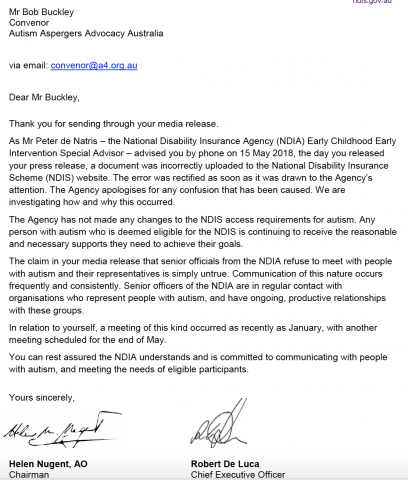 On the 15 May 2018, I received a message for another in the autism sector saying that Ms Vicki Rundle "is willing to speak to any member of the autism sector" so I emailed her asking for a call. But no one from the NDIA called me.

Be assured that very few people believe the information upload was just a "mistake". That does not explain why the material was prepared in the first place.

Your letter claims that "the error was rectified as soon as it was drawn to the Agency's attention". A4's media release was sent out because that was not true; the website had no information for the whole following working day and was not corrected until later in the evening after my media release went out. For a day, we were being told there was "a mistake"; there was no information, just a claim that most people simply do not believe.

You complain about A4's media release saying "senior officials refuse to meet". A4's media release specifically identified you two as the senior officials referred to. A4 made numerous requests to meet you because meeting NDIA minions had been spectacularly pointless - see http://a4.org.au/node/1708. To my knowledge, my statement is accurate - you have not met autistic people or their representatives. I understand that Mr De Luca met some ASD-specific service providers but has not met autistic people or their systemic advocates.

The autistic community is not in any way "assured that the NDIA understands and is committed to communicating with people with autism" (many of whom prefer to be call autistic people). Autistic people are a major section of NDIS participants yet your organisation refuses to engage properly with them as stakeholders in the NDIS. That does not assure us at all.

A4 is open to improving relations with the NDIA. Are you?

A4 is the national grassroots organisation advocating for autistic people, their families, carers and associates. A4 is internet based so that Australians anywhere can participate.

“The first step in solving any problem is recognising there is one.” Jeff Daniels as Will McEvoy in The Newsroom.