A therapy for infants showing early signs of autism reduces the chance of the child meeting diagnostic criteria for autism at three years of age. That’s according to our new research, published today in the journal JAMA Pediatrics.

Therapy for children with autism often begins after receiving a diagnosis, which usually doesn’t occur until after the child turns two.

The widow of former deputy prime minister Tim Fischer has accused the Coalition of mismanaging the National Disability ­Insurance Scheme, which she says is shrouded in secrecy and too ­important to fail.

Judy Brewer, a high-profile disability sector advocate whose son Harrison has autism, said she was angry the ­government appeared to be blaming people with disabilities for cost blowouts when it was likely the $24bn scheme’s financial assumptions were wrong.

Autism Aspergers Advocacy Australia (A4) deplores media reports (see Annex below) saying that “The Minister responsible for the National Disability Insurance Scheme has blamed an uptick of Australia’s aged, autistic and obese people for the ‘unsustainable’ rising costs of the service”. Your government’s war on autism is unacceptable. We complained about it before and were ignored.

Aged autistic people are one of the smallest subgroups in the NDIS: there were just 125 of them in June 2021, just 0.8% of 14K+ NDIS participants in that age group. While their funding level is higher than average for the NDIS, we doubt the numbers in this very small group will increase significantly for some time. We have not found NDIA reporting on obesity; we doubt the NDIS even has reliable data on obesity of NDIS participants.

When asked "How well is Australia respecting people's human rights?" answers indicated that people with disability are at most risk of missing out on their right to education: see https://rightstracker.org/en/country/AUS?as=hi&tab=atrisk

Australians with autism will have access to online, digital and phone-based support services that can offer specific advice through a new national hotline.

The federal government will announce the $8.4 million funding boost to the program, called Autism Connect, on Tuesday.

Following its success, it will now become a national service that will be run by peak autism body, Amaze.

Those needing information, advice or referrals will be able to call the hotline for free.

When Liberal Senator Hollie Hughes was elected to Federal Parliament, she paid tribute to her “gorgeous son Fred” who was diagnosed with autism in 2012, and vowed to pour her “blood, sweat and tears” into autism and disability support.

A4 received the following response to a Freedom of Information request. This response is alarming because it shows the NDIA just made up the criteria and amounts for its 4 levels of early intervention support for autistic children in its consultation paper (see links below). 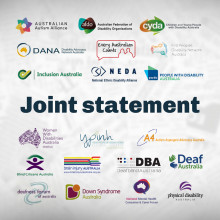 The whole disability sector opposes the NDIA's plans for so-called "Independent Assessments". The logos of some of the first organisations to support this joint statement are seen here.

Their Joint Statement is available from https://everyaustraliancounts.com.au/nd….

The Victorian Royal Commission released its report. It is available from: https://finalreport.rcvmhs.vic.gov.au/

The report is in 5 volumes and 4 appendices. It is a big report: the volumes range from 36Mb to 54Mb.

Very little of the report relates to autistic Victorians.

The vast majority of children with autism have at least one mental health condition too, new research suggests.

Almost 78% of kids on the spectrum are diagnosed with some type of mental health condition and almost half have two or more. Even among preschool-age children with autism, 44.8% have such conditions.

By contrast, just 14.1% of young people without autism have mental health conditions.