Disability rights groups, Labor and the Greens have slammed a decision to hire the multinational outsourcing giant Serco in a key role administering the national disability insurance scheme.

The National Disability Insurance Agency (NDIA) announced on Friday afternoon that Serco, a company with a chequered corporate history, would help run its contact centres under a two-year contract.

The decision would put the company at the frontline of the NDIS, interacting frequently with people with disability and service providers, many of whom are still grappling with a vast, complex and sometimes confusing scheme.

But the decision has outraged disability rights campaigners, who say Serco’s poor history abroad and its lack of experience in disability should have precluded it from any role delivering the landmark scheme.

People with Disability Australia co-chief executive, Matthew Bowden, said he was “gravely concerned” that Serco would, like other third-party providers, fail to uphold the values, objectives and principles underpinning the NDIS.

“We have no details on what expertise Serco have in providing communication services for people with disability, or why the NDIA has decided to outsource such a vital part of its services,” Bowden said.

Paralympian Kurt Fearnley was among those expressing concern at the decision, saying Serco would be “racking their brains on how they can bring lived experience of disabilities into their workplace”.

“The NDIS will be worthless if people with disabilities aren’t at its core!” he tweeted. 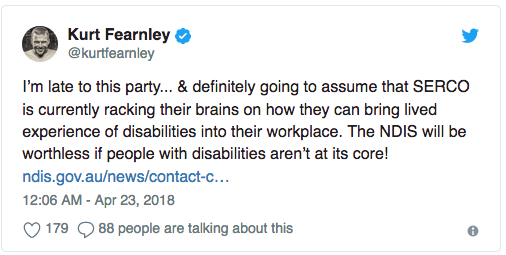 The chief executive of Autism Awareness, Nicole Rogerson, said she was concerned that Serco, a company with a lack of intimate involvement in disability services, had been handed such a critical, customer-facing role.

“It just looks like an accident waiting to happen, and it worries me senseless,” she told Guardian Australia.

Labor’s social services spokeswoman, Jenny Macklin, said the Serco contract was a “worrying development”. She said it showed the restriction on staffing levels at the NDIA should be lifted, in line with the recommendations of the Productivity Commission.

“The NDIS exists to improve the lives of people with disability – not the profits of multinationals.”

The Greens spokesman on disability rights, Jordon Steele-John, said he was appalled by the decision, and raised concerns about Serco’s poor record of caring for people. He also feared for the security of participants’ private information.

“People in the disabled community have been warning about lobbying by Serco with regards to the NDIS for years and their worst fears have now come true,” he said. “The last thing disabled people need when trying to interact with the NDIA is to be treated as a commodity.”

The NDIA said Serco would not be able to take any services or data offshore.

“Under the partnership arrangement, Serco’s staff will be fully trained and will comply with all commonwealth government privacy and security requirements,” the NDIA said. “As an Australian-based supplier, Serco will ensure that no services or data will go offshore.”

Serco already has a contract to help run Centrelink’s troubled call centre, and the federal government announced on Monday it would hire another 1,000 call centre operators from the private sector.

The Community and Public Sector Union (CPSU) said the hiring of the staff would not solve Centrelink’s problems.

The union’s national secretary, Nadine Flood, said: “I’ve been calling loudly for years for more permanent Centrelink call centre staff to replace the more than 5,000 jobs the Turnbull government has slashed in this department. Instead the government is continuing to sell the agency off piece by piece, lining the pockets of their corporate mates like Serco rather than putting that money into wages and secure jobs for call centre workers.”

Serco has been investigated by the UK’s serious fraud office for billing the government for electronic monitoring of criminals who were either dead or still behind bars. It paid back tens of millions of pounds but was later cleared of fraud.

It had also presented false data to the UK’s National Health Service 252 times, was accused of fraudulent record keeping and had allegedly manipulated results when it failed to meet targets. The company has also been accused of covering up the sexual abuse of immigrations in the UK’s Yarl’s Wood removal centre.

The Guardian revealed last year that Appleby, an offshore law firm operating in the world’s tax havens, deemed Serco to be a high-risk client before agreeing to help it set up a company in Mauritius. Appleby said Serco’s “history of problems, failures, fatal errors and overcharging” increased the law firm’s exposure to risk.

The company will help build and run Australia’s largest prison, near Grafton in New South Wales, and already operates private prisons in Western Australia and Queensland, provides non-clinical services in hospitals and is building Australia’s next Antarctic discovery vessel.

Serco and the NDIA have been contacted for comment.