For individuals with ASD and a co-morbid intellectually disability, the lifetime cost to society is thought to be in excess of $1 million (Buescher, Cidav, Knapp, & Mandell, 2014). However, the quality of life cost to families is much greater (Dillenburger, 2016). For example, families of a child with autism frequently must pay higher than average childcare costs, and many times one parent is forced to give up work or reduce working hours due to provide care for the child with ASD. It is estimated that only 15% of adults with ASD are engaged in meaningful employment (Rosenblatt, 2008). In their review of cost benefit analyses of EIBI, Cross, Coyne, Broberg, and Lubbers (2013) determined that the cost savings substantially exceeds the early intensive treatment cost for a 3-year-old child with autism or ASD. Some reports have found a home-based program to be less expensive than alternative non-ABA based special school placements (Columbia Pacific Consulting, 1999).

Synergies Economic Consulting carried out a cost benefit analysis of providing EIBI to children with ASD (www.synergies.com.au). The authors designed three groups to capture the population of children with autism. The three groups were described as follows:

Group 1 – children with severe intellectual impairment – likely to be nonverbal and suffer from significant behavioural issues and anxieties (estimated to account for approximately 20% of the children that would receive early intervention);

Group 2 – children with mild to moderate intellectual impairment – likely to experience difficulties with language and communication, particularly in social settings (estimated to account for approximately 60% of the children that would receive early intervention); and

Group 3 – children with High Functioning Autism – while not suffering from intellectual disabilities, individuals in this group can experience difficulties in other areas that can adversely impact long-term outcomes in key areas (estimated to account for approximately 20% of the children that would receive early intervention).

The authors applied a cost-benefit analysis to each group, and determined that, with EIBI, the average total economic benefit per child exceeded $1 million. 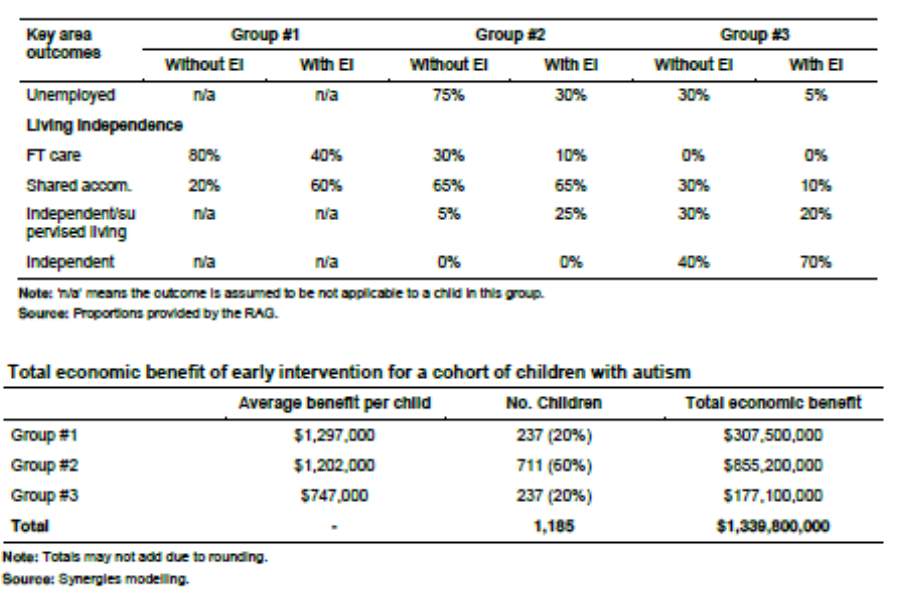 Jacobson, Mulick, and Green (1998) also developed a cost–benefit analysis model of EIBI based on the range of outcomes reported by previous group studies. The authors applied representative costs from Pennsylvania, including costs for educational and adult developmental disability services, in a cost-benefit model, assuming average participation in EIBI for three years between the age of 2 years and school entry. Information on the proportion of individuals accounted for by each group, ABS data on the number of live births in Pennsylvania per annum, and autism prevalence data was applied to these estimates to determine the total economic benefit for a cohort of children with autism in (a) regular education without supports, (b) some in special education (partial effects), and (c) some in intensive special education (minimal effects). At varying rates of effectiveness, the model proposed by Jacobson et al. estimates that cost savings as a result of participating in EIBI range from $187,000 USD to $203,000 USD per child for ages 3-22 years, and from $656,000 to $1,082,000 per child for ages 3-55 years. In this study, the authors assumed that there would be differences in initial costs of $33,000 and $50,000 per year for EIBI, but found that these differences had a modest impact on cost-benefit balance. The cost of EIBI was greatly outweighed by estimated savings.

Dillenberger (2016). The use of ABA interventions in the evidence-based management of autism spectrum disorders. Letter with parts taken from a chapter published M. Fitzgerald.

Rosenblatt, M. (2008). I exist: The message from adults with autism in England. Retrieved from http://www.autism.org.uk/~/media/NAS/Documents/Extranet/Autism-library/Magazines-articles-and-reports/Reports/Our-reports/I%20Exist%20-%20the%20message%20from%20adults%20with%20autism.ashx