Hannah Gadsby on her memoir, Ten Steps to Nanette, and how her autism diagnosis changed her life Hannah Gadsby's memoir, Ten Steps to Nanette, opens at the scene of a fancy Hollywood garden party at the home of actress Eva Longoria.

Celebrities are queuing to talk to Gadsby, whose Netflix comedy special, Nanette, had just sucker punched the world.

But the world-famous comedian extracts herself from a conversation with celebrated singer-songwriter Janelle Monáe to examine the preternaturally green lawn underfoot.

It's an immediate insight into Gadsby's brain, where thoughts and ideas bubble over — often clashing abruptly with the real world.

"My world is so much different than it was five years ago. I cannot explain how different it is," she tells ABC RN's Big Weekend of Books.

She's referring not only to the global success of Nanette and its follow-up show, Douglas, but also to her 2017 diagnosis of autism spectrum disorder and ADHD.

"It was an eye-opening thing, to start to understand that you think differently," Gadsby says.

'Begin at not normal'

Ten Steps to Nanette details Gadsby's quest to understand her own biology, beginning in her conservative and isolated hometown in north-west Tasmania.

Her memories from childhood and her teen years have jagged edges, often tinged with self-loathing and confusion over her sexuality and neurodiversity.

"Back then, I wasn't aware that women could have autism — it's not part of the popular conversation," she says.

After decades of mental health struggles, the diagnosis came as "a revelation".

"Once you get the diagnosis, particularly if you're diagnosed later in life, it comes as no surprise," Gadsby says.

"It's given me more solid ground to stand on.

"Before my diagnosis, I was just trying to make sense of myself in front of an audience, and now I can just sit back and relax and think, 'Well, I'm atypical, so that's where I begin.'

"It's freed me up in a lot of ways. I'm not trying to twist myself to feel normal, I'm just standing straight and going, 'Well, we can begin at not normal and move off from there.'" Gadsby recounts how she was told she was "too fat" and "too female" to be autistic.(Supplied)

A large part of the memoir is dedicated to explaining how Gadsby's autism functions: how the colour blue (which she wears exclusively) calms her frazzled synapses; how the clink of a teacup hitting a saucer causes her tangible pleasure; how art history helps her make sense of a bewildering world.

"Of course, everyone on the spectrum has a different experience, but from what I understand, talking to a lot of people from my community, it's like we think about ourselves inside our own body before how other people perceive us," she tells ABC RN.

"Often that leads to bullying at school, but as you get older, I think it becomes slightly more freeing, as you understand yourself and the contortions you don't want to fold yourself into anymore."

She also writes, with painful clarity, about the challenges of negotiating and communicating as an autistic person in a sometimes hostile world.

"We move through a world where every space is demanding every inch of our attention," she says.

"We don't think about the aesthetic of things in terms of our own safety; we tend to think of that as icing on the cake, as opposed to just being a nurturing environment important to our mental health.

"I honestly think that if people on the spectrum designed our physical spaces, there'd be a lot less rage."

For Gadsby, crafting Nanette was a process of working with her autism and ADHD to present her trauma as a social and political statement.

In the last part of the book, she describes the various cues and fail-safes she invented to tip-toe around meltdowns and shut-downs triggered by the material she was exploring.

It's this courage and vulnerability that shot her to superstardom after Nanette aired.

"The work I do on stage is pretty much [me] just learning on the go, and then I almost do a report and go, 'This is what I'm learning at the moment' — that's certainly what Nanette was," she says.

"That's the spirit in which I approach new work, just trying to keep living my life as best I can, and then reporting on the lessons learned or unlearned." 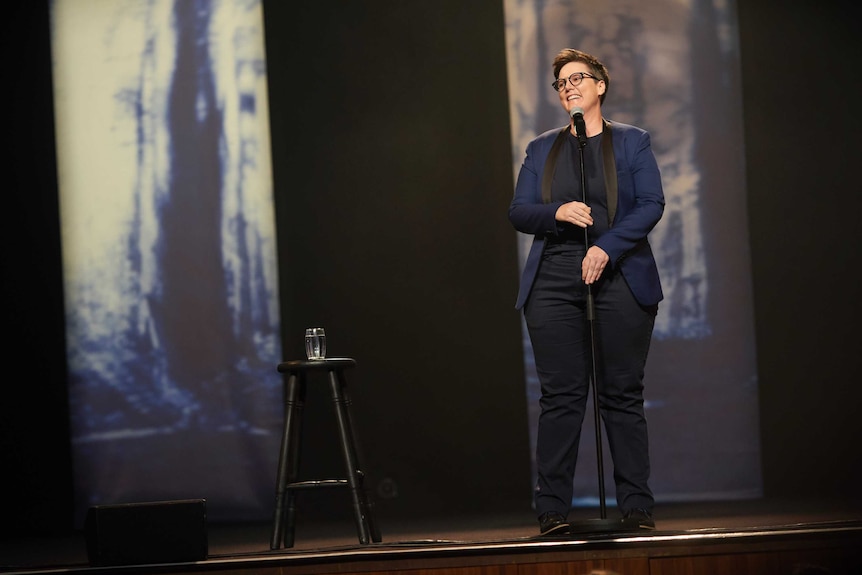 In Ten Steps to Nanette, Gadsby describes how she learnt to listen to her body both on and off-stage, so she could safely revisit traumatic events in her past.(Supplied: Netflix/Ben King)

This can be tough for her family, some of whom learnt of her past abuse for the first time during a live show.

"From the moment I started doing comedy, I was mining my personal life, particularly growing up," Gadsby says.

"[My family has] grown up with me, from the smaller stakes, in front of 10 people at the Adelaide fringe, to Sydney Opera House, beaming around the globe.

"It's a constant conversation we're having; we're certainly a lot closer. They've had to process some stuff, as have I."

While her loved ones (including new wife Jenney Shamash) are supportive, the comedian is no stranger to rejection.

It's given me more solid ground to stand on.

"You just know that a certain section of the community is not going to enjoy your very existence, and there's not much to be done about that," she says.

"You just have to work on those that have an open mind and a caring heart."

It's a level of maturity and self-knowledge Gadsby says would awe her younger self.

"I always feel like if I went back in time, I'd scare the absolute shit out of myself. Me as a kid, I was not ready to know what I know now."

A moment for diverse voices

In Ten Steps to Nanette, Gadsby explains how the intersection of her queerness and autism is a cornerstone of her identity.

After all, she grew up in a region infamous for its homophobic vitriol, in a state where homosexuality was illegal until 1997. She's pleased to see more diverse stories being told in art and the media, but is quick to acknowledge that her position is one of privilege.

"I think the more voices the merrier, and we're really experiencing that, particularly with queer representation. We're seeing a real moment for a diverse range of autistic voices, which is heartening.

"I don't think that the comfort that I'm feeling is necessarily available to a lot of people on the spectrum. I think there [are] a lot of people who go undiagnosed, and certainly, the queer autistic community is really underserved."

As for the future of diversity in comedy, Gadsby is a realist.

"I don't think comedy is going to get there without the rest of the world getting there. And I don't see that happening in my lifetime," she says.

"I feel like it's just something we have to actively strive for, without hope of ever seeing it.

"That's kind of a sad place, but it's also an empowering place because you can just put your head down and get on with it."

Hannah Gadsby spoke to Mon Schafter for ABC RN's Big Weekend of Books — an on-air writers' festival featuring interviews with the writers you love. Listen back to all the conversations on the ABC listen app.