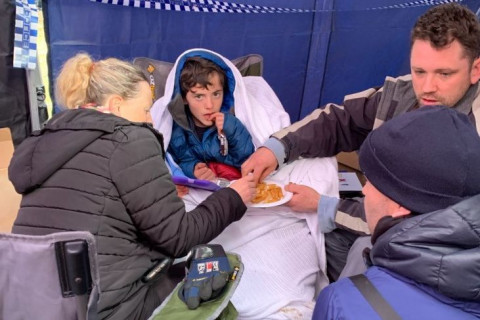 After two freezing nights on Mount Disappointment, William Callaghan was found by rescuers using a search strategy "tailor-made" for his autism, an effort advocates say we can all celebrate and learn from.

It was one of Victoria's largest searches, with more than 500 police and volunteers involved, and the risks were high right from the beginning.

William become lost after running ahead of his dad while on a day-walk at Mount Disappointment on Monday.

He was not prepared for an overnight stay in freezing temperatures, did not have food or water and has autism and is non-verbal.

To find William in the thick bushland, about 80 kilometres north of Melbourne, police had to adapt their search methods.

William is carried by his mother's partner after being rescued following two near-freezing nights on Victoria's Mt Disappointment.(AAP: James Ross)

Singing replaced shouting while rescuers combed through the bush, the smells of barbecues were used to attract William in case he was close by and locals were asked to play Thomas the Tank Engine music and leave food and water out for William.

Acting Inspector Christine Lalor, who oversaw the search and became the face of the police effort to find William, said as time went on the risks were growing.

But she said rescuers and William's mother Penny Callaghan remained optimistic even as the search stretched into Wednesday.

"I just had a feeling we were going to find him that day," she said.

"I think it is important to not lose hope and to stay optimistic."

She said it was crucial that police had an understanding of William while searching for him.

Acting Inspector Lalor said she had worked with people with disabilities before in her role running domestic violence investigations and most police had some training in the area.

"We had obviously spoken to the family in regards to what tactics we could use, we also spoke to William's teachers and they gave us a few strategies," she said.

The way police shaped the search to William has been praised by autism advocates and friends and family of William's.

Claire Thompson was one of the friends who helped Ms Callaghan through the two-day ordeal.

"They were listening to Penny and the people who know about autism so that they could personalise the search and not just do a standard search that they might have done in the past," she said.

Ms Thompson said police were trying to understand how William would likely behave while missing and where he would likely go.

She said there was a big effort to minimise sensory stressors.

Ms Thompson said by Wednesday, the family was desperate for William to be found before sunset.

The day William was found

The first breakthrough came before lunch when William's shoes were found.

It helped the search team narrow the area they were looking for William in.

Then it was singing rescuer Ben Gibbs who found William, standing alone with bare feet.

"I was just wondering through the bush, and it was quite thick, so I was breaking my way through, and then he was just like about 15 metres from me just standing there, just really angelic," he said.

Mr Gibbs gave William socks, a jacket and a hat as well as some chocolate before carrying him some of the way back.

The spot where William was found was just 1.5 kilometres from the search command post.

Acting Inspector Lalor said telling William's family he had been found was a career highlight for her.

"Once it was confirmed I think a lot of mixed feelings, overwhelming emotion, excitement and just relief, relief for obviously William and relief for Penny and the family," she said.

What was even more surprising for the police officer was the good condition William was in.

"It was quite extraordinary, when I got the call initially saying he was walking and seemed OK and had had something to drink and eat," she said.

Ms Thompson said Ms Callaghan had taken herself for a short walk to get some space when news came through that William had been found.

She said initially the moment felt not quite believable and Ms Callaghan needed to see her son to understand the news.

William reunited with his family

And for Ms Callaghan, she later said William's survival showed what an amazing person he is.

"He didn't really go too far, he was clearly waiting to be rescued," she said.

She said William was happy he was back with his mum.

"I managed to steal a kiss or two," she said.

"He likes deep pressure so he's had a lot of body squeezes."

Ms Callaghan said she could not wait to meet Mr Gibbs.

"He clearly did all the right stuff. What an amazing guy," she said.

Ms Thompson agreed, saying things could have gone differently with the search if the rescuers had not listened to the messages about how to interact with William.

"It sounds like Ben's a really lovely gentle person, so he was the right person to find William," she said.

"He just took all the pointers on, he was talking about his special interests, which helped him feel relaxed.

"He didn't startle him."

William spent last night at the Royal Children's Hospital, where he is being treated for a suspected broken foot and needs to have an insect removed from his ear.

He was also been treated to a meal of chips and chicken nuggets.

Penny Callaghan said she could not wait to meet the 'amazing man' who found her son William.

Rescuers are unsure how exactly William survived in such tough conditions and came through the experience in fairly good condition.

Ms Thompson said paramedics were quite shocked at how good a physical condition William was in.

"The police were absolutely honest and correct when they said the weather we were dealing with was deadly weather," he said.

SES volunteers hold up a sheet to shield William Callaghan from the crowds after he was found.(ABC News: Patrick Rocca)

Another friend of Ms Callaghan's who helped the family through the last few days is Simone Griffin, who has also worked with children with autism.

She believes William's personal characteristics may have helped save him.

"He runs hot, so often doesn't need to wear lots of clothes, he is also on the go and likes to move all the time, he also doesn't need much sleep and lives in the moment, so was likely not stressing about the future," she said.

She said some of these characteristics are common in children with autism.

Ms Griffin praised the range of people involved in the rescue who sought out information on William and autism, so they could shape their search efforts.

Those personalised efforts included rescuers waiting for William to leave before they celebrated with a loud cheer.