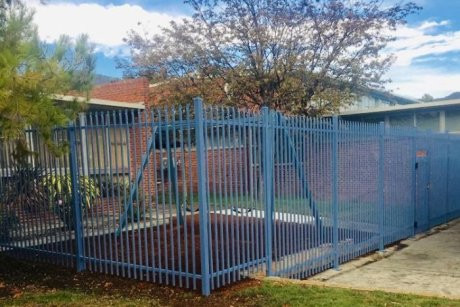 A lockable fenced play area for teenagers with autism at a Hobart high school has been described as a "cage" by the parent of one student, who said it risked "taking away from their humanity".

The play area is part of the Department of Education's flexible learning program
A disability advocate says "the system is letting us down"
A Government spokesman said medical professionals, "including paediatricians, psychologists" and OTs were consulted about the fenced area

The lockable high fence at the high school in Hobart's northern suburbs was built for high-needs children with autism about a month ago, the ABC understands.

The fenced-off area was designed for several very high-needs students who attend the school to work on individualised learning programs.

Kristen Desmond, founder of the Tasmanian Disability Education Reform Lobby, called for the Education Minister to investigate, saying her complaints to the department had been in vain.

"In this day and age it is not good enough, and I don't think people looking at those photos would think that is OK, because it is not OK," she said.

Ms Desmond said there were many students with complex needs in the state's schools, and building a high fence should not be an acceptable solution to the department.

"At the end of the day, we have lots of kids with complex needs in our schools," she said.

"The system is letting us down, if this is the best solution."

Photo Julian and Kate Edwards say they were appalled by the "cage".

Two of Julian and Kate Edwards' children who have autism attend the high school, but were not in the group of higher needs students using the fenced-off outdoor area.

"It's an enclosed area with two locked gates with bars that are extremely high and spiked on the top — it's a cage, not a compound, it's a cage," Mr Edwards said.

The Edwards' said they were speaking out because their complaints to the school had fallen on deaf ears.

Ms Edwards said there was no toilet and no drinking fountains in the area.

"They're isolating them, they are separating them," he said.

"It's like saying these students are different to you, it's almost like taking away from their humanity."

Mr Edwards called for better training and support for teachers at the school.

"There has to be other options, you can't just be putting students in a confined area for safety reasons," he said.

"There has to be other ways of inclusive education.

"Surely they could come up with better ideas like sensory rooms that the primary schools use."

Last year, a mother in northern Tasmania raised concerns about the standard of training for teachers working with children who have disabilities, saying her daughter — who has autism — was traumatised and teased after being placed in an open box in her classroom.

A spokesman from the Education Department said they had received support from the parents of the students who used the structure, who had commented on the progress of their children since attending the school program.

He said the students used the area at separate times and were supervised by two support staff.

Earlier, a Government spokesman said the Education Department had consulted with parents and medical professionals, "including paediatricians, psychologists and occupational therapists, disability advocates and the students themselves where possible".

He said the fencing was chosen to match the existing fencing of the school, adding that changes to its design would be made.

"There has been some feedback in relation to the appearance of the fence and this has been taken on board," he said.

"Proposed alterations are currently being shared for consultation, to be completed during the term one holiday break."

Photo A disability advocate says building a fence should not be a solution.