Stress, despair in care of children with autism 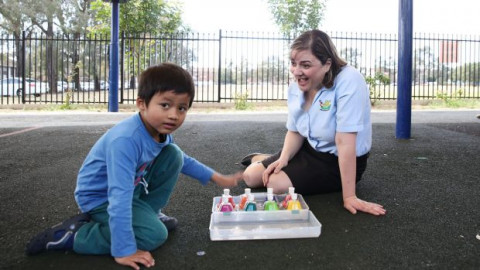 They say that the mother of a child with autism experiences a level of stress comparable to that of a combat soldier.

Her two boys, now aged 15 and 13, were diagnosed with autism at the ages of three and two respectively and the family plunged into near-constant crisis, including a three-year period of faeces smearing and several terrifying occasions when they escaped naked from the windows.

"In the early days it was horrendous," Ms Fava said.

"There was no assistance to be found anywhere. It was really full on. Every six months I would end up in hospital on a drip because I was so worn out."

The deaths of Fernando Manrique, Maria Lutz and their two children, Elisa, 11, and Martin, 10, in their Davidson home on Monday has opened debate about the level of support offered to the parents of children with austism, with some calling for the suspension of judgment upon those who would snap under pressure.

It is not known what role if any the children's high support needs played in the suspected murder-suicide.

But it would not be the first time that the parent of a disabled child has arrived at a terrible final solution, including the stepfather of an 11-year-old boy who was strapped, wet, to a chair and left in a garden shed overnight in the central west of NSW in 2011, and the South Australian woman who stabbed her 16-year-old intellectually disabled son in the neck after trying to gas him and herself in 2009.

The National Disability Insurance Scheme [NDIS], which will be rolled out across Australia over the next three years, will allow many people with autism and their families to access government-funded services for the first time.

People who qualify for the scheme will receive funding packages of up to $30,000 which they can tailor to their individual needs.

Autism Awareness chief executive Nicole Rogerson said autism should never be used to excuse domestic violence, but families needed to be better supported than they had been in the past.

"We don't know to what extent autism was a contributing factor and I don't want to guess what was going on in that family," Ms Rogerson said.

"What's tragic is this family were located in the NDIS rollout zone – they were literally months away from having that support.

"It's incredibly stressful in families like this. It's 24/7. Some families can have chronic sleep deprivation, their children can be non-verbal, they can be self-harming.

"There's very little support and unless a family is really good at advocating for themselves, they're not going to get anything. No one is coming to help you."

Autism is a developmental disorder characterised by impaired behaviour and social interactions.

Families in the NDIS trial sites have used their packages to pay for services such as behavioural therapies, social and community activities and support workers that are provided through community organisations.

Ms Fava and her husband made sacrifices to pay for support workers and therapists that would allow her sons to reach their full potential, but she worries about whether they will ever be able to live alone, get married and have jobs.

"You don't actually grow out of it, it's just a matter of what strategies do you use to cope in mainstream society," she said.

These parents include disability advocate Maree Buckwalter, whose adult son has a severe intellectual disability and epilepsy.

He weighs 100 kilograms and behaves like a three-year-old and wants her attention "all the time".

"You do feel trapped," she said.

"You haven't got a life. I would like to know that when I can no longer look after my son there will be a place for him where he feels happy and safe, and that's not there now."

Some carers are dubious about the difference that can be effected by the NDIS, which has a controversial exclusion on using the packages for accommodation.

The NSW government has outsourced its disability and home care services to private providers under the NDIS, raising concerns that there is no provider of last resort if those organisations knock back individuals with very high needs.

Vanessa Browne is refusing to sign up to the NDIS until her son Alex has secured a permanent group home that is managed by a provider she trusts.

"People with a vision impairment or people with Down syndrome who can now get a job, they're happy. People with profound disabilities, they're the ones getting shafted."

But Children and Young People with Disability Australia chief executive Stephanie Gotlib said the benefits of the NDIS would be significant.

The packages would pay for services such as speech therapy and behavioural support that would ease their frustration and have flow-on consequences for families, she said.

About 97 per cent of children with disabilities lived with their parents.

"If you have a child who is well supported and accessing all the things they can in the community, you're going to get happier families," Ms Gotlib said.