from the United Kingdom

A law firm that specialises in contesting claims for children with special educational needs (SEN) has apologised after publishing a series of tweets that appeared to gloat at parents.

Baker Small, a law firm that acts for local authorities, triggered widespread anger among parents of children with disabilities with the remarks made on social media on Saturday. The firm subsequently deleted them and made a donation to charity.

One of the tweets said: “Crikey, had a great ‘win’ last week which sent some parents into a storm!” 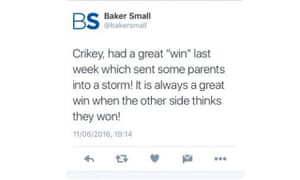 Baker Small tweet, which has since been deleted. Photograph: web

Another referred to a tribunal victory over an attempt by parents to get funding for an intervention that can help autistic children, called Applied Behavioural Analysis (ABA). It said: “Great ABA Trib win this week … interesting to see how parents continue to persist with it. Funny thing is parents think they won ;)”

Several people reprimanded the law firm for its remarks. “Probably not that funny on reflection?” tweeted Daisy Russell in response.

But the person writing on behalf of Baker Small replied: “Whenever someone thinks they have won and they have conceded 90% of their case, it does make me smile.”

“A little more gravitas might be in order, you are dealing with vulnerable children’s lives,” a campaigner for ABA wrote.

Later the Baker Small Twitter account posted another message with a picture of a kitten laughing, beneath the words: “Some great tweets received today from people who just see a one-sided argument … just shared them with my cat…”

The law firm’s tweets were later deleted, but were still visible on the Special Needs Minefield blog. Debs Aspland, the blog’s author wrote: “This company was not just celebrating a win, they were laughing at the parents who had lost. Somehow, the child at the centre of this didn’t appear even to be considered.”

The anger over the law firm’s flippant postings has roots in a deeper unease at local authorities’ increasing determination to fight parents at tribunal for funding of their children’s special needs provision.

Baker Small is, or has recently been, contracted to provide legal services in relation to contesting SEN and disability tribunals to a number of local authorities including Buckinghamshire, Norfolk, Hertfordshire and Gloucestershire, with total contracts estimated as being worth up to £1m.

The Milton Keynes-based company has for years caused unease among parents concerned by the “adversarial” nature of its style on behalf of local authorities at SEN tribunals.

In a now-deleted description of Mark Small, the company’s founder, the firm’s website appeared to advertise his skills at helping local authorities cut costs: “Mark also has experience of advising local authority SEN departments on a range of matters including managing and terminating ABA programmes, [and] parental complaints.” That had led some parents to refer to him as “the Terminator”. 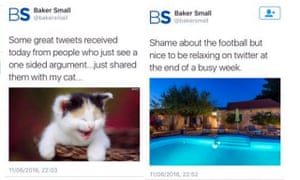 Baker Small tweet, which has since been deleted. Photograph: web

The Guardian has been contacted by numerous parents who describe bruising experiences during SEN tribunals, when the local authorities were represented by Baker Small.