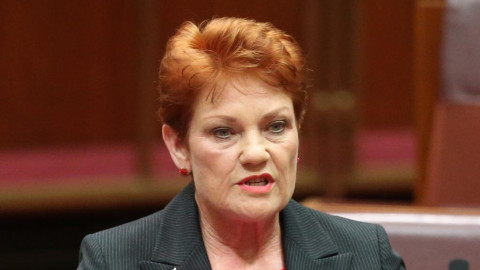 ONE Nation leader Senator Pauline Hanson announced this morning that her party will back the Federal Government’s $18.6 billion school funding package.

But she also said “we need to get rid of” autistic children from mainstream classrooms, arguing teachers had to spend too much time with them at the expense of other students’ education.

She said parents and teachers had raised the issue with her of children with disabilities or autism in mainstream classrooms.

“These kids have a right to an education by all means, but if there’s a number of them these children should actually go into a special classroom, looked after and given that special attention,” she said in the Senate this morning.

“Most of the time the teacher spends so much time on them they forget about the child who wants to go ahead in leaps and bounds in their education, but are held back by those.

“It’s no good saying we have to allow these kids to feel good about themselves and we don’t want to upset them and make them feel hurt.

“We have to be realistic at times and consider the impact that is having on other children in the classroom.

“We need to get rid of those people because you want everyone to feel good about themselves.”

She said it was difficult for One Nation to come to the position of supporting the $18.6 billion in extra funding for schools.

“I hope this will improve our educational standards if it is addressed in the classroom,” Senator Hanson said.

She criticised Labor for not supporting the bill, as the Opposition wants a further $22 billion to match the original Gonski funding proposed by the Gillard Government.

“I think it’s a good start, $18.6 billion. That’s a start, why can’t you work with the government with regards to this and then build on that,” she said.

“Stop opposing things just because you’re on the opposition. It’s about working together for the future of this nation. I just get so frustrated with the whole lot of you.”