At just nine years old, grade 3 student Thomas Brown might be the youngest child ejected from a Victorian school in years.

Thomas has level-two autism spectrum disorder and has had repeated run-ins with another boy at his school, St Leonard’s College, a non-government school in Brighton East. The school ruled this week that he should not return in term four.

His bad behaviour includes spitting, striking the other boy with a cricket bat and making an insulting remark about the boy’s mother.

Thomas’ mother, Emma Brown, said his schooling was going well in term one this year but problems grew in terms two and three as the school moved back and forth between face-to-face and remote learning.

Eager for a fresh start, the Brown family had chosen to withdraw Thomas from St Leonard's College this year anyway, but asked for that decision to be reversed when an alternative school could not be found until term one next year.

This week, principal Stuart Davis wrote to the Brown family, telling them that Thomas would not be welcome at the school next term.

His trigger for the decision was the expected return to face-to-face learning.

“It is now evident that we will return to on-site learning in term four, which requires me to prioritise the emotional and physical wellbeing of all students,” Mr Davis wrote.

“Under these conditions, I do not believe it appropriate for Thomas to return to St Leonard’s College for term four.”

He also wrote that for the rest of term three, Thomas and his sister, Elsie, who is also autistic, would only be permitted to attend school on separate days.

Mr Davis told The Age that Thomas had not been expelled; rather, his parent's reapplication had been declined, for reasons "which reflect significant concerns about the safety and wellbeing for other children".

The decision leaves Thomas facing a significant gap in his education, with no school to attend until 2021.

His father, Brendan Brown, says the family is considering legal action on the ground of discrimination.

“They’re not really up to date with their obligations to children with a disability,” he said of the school. “They didn’t seem to have much tolerance.”

Mr Davis had initially told the family Thomas' return would be subject to a conversation.

The Department of Education and Training published data last month that showed that no child below year four has been expelled from a government school in at least the past two years.

School expulsion processes were reformed in Victoria two years ago, following a damning Ombudsman's report that found the practice disproportionately affects students with a disability, students living in out-of-home care and Indigenous students.

The reforms give students and their families and carers more grounds to appeal. But they only apply to government schools.

The Ombudsman's 2017 report also raised the alarm about informal expulsions, or "soft exits", for which there is no data but which potentially number in the thousands each year.

The non-government school sector does not hold data on expulsions. 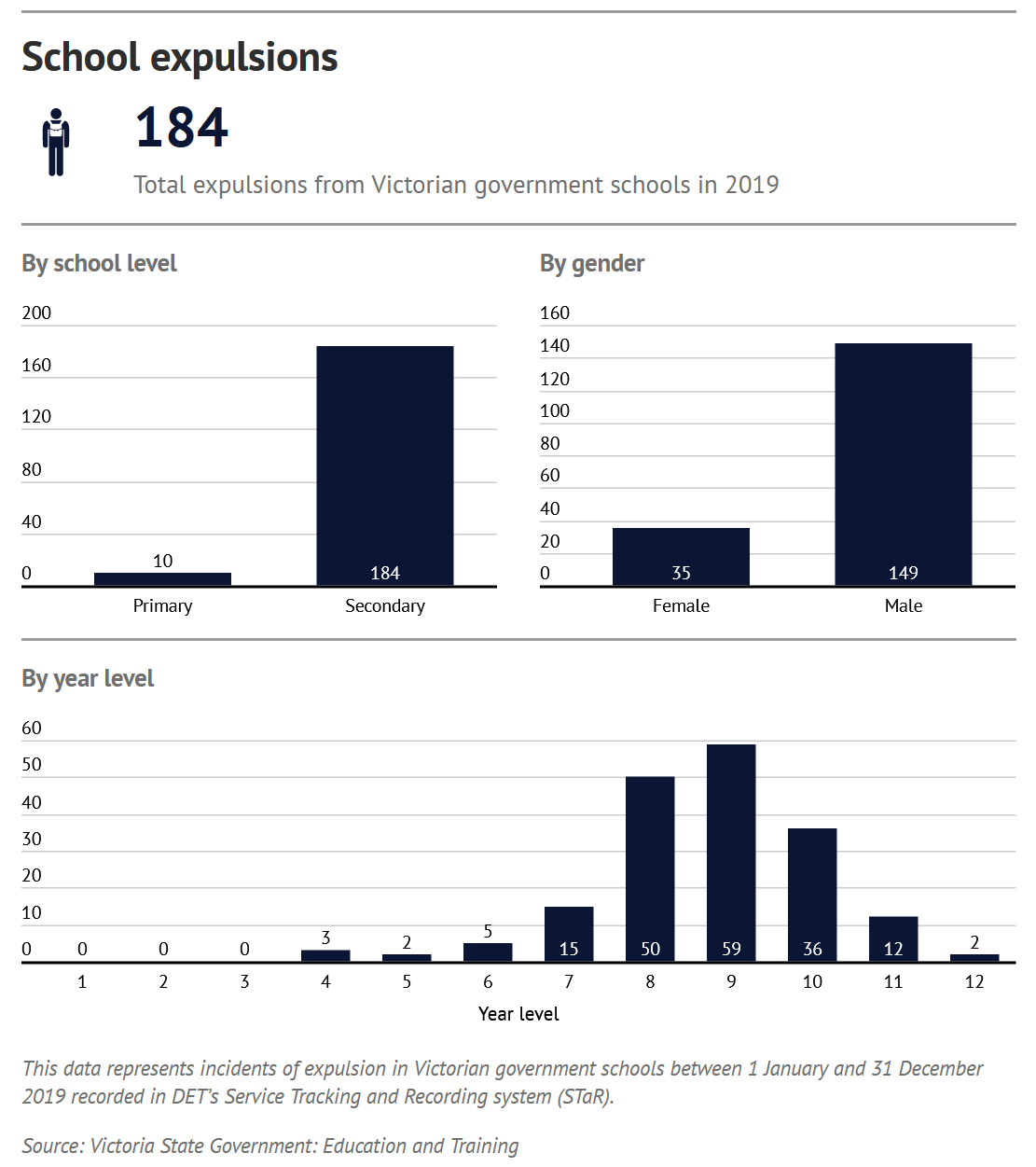 “But I would support some co-ordinated effort across all education providers, because the evidence is very clear: expelling students is harmful to the individual student and the family and is rarely the best approach to working with a child who needs particular support.”

Ms Buchanan said it was notable that the boy's problems had intensified during the COVID-19 pandemic, given children with autism often suffer from a loss of regular routine.