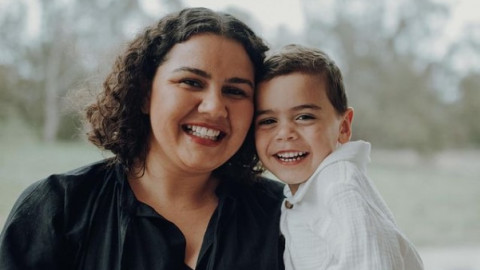 When Tanika Davis's son was diagnosed with autism at just two years old, the Worimi mother was confronted with the stigma surrounding the developmental disorder, but also surprised at the lack of consideration for Slade's Indigenous culture.

"We thought that everything could be quite readily available to us as a family … but unfortunately it wasn't," she said.

Ms Davis said she had to inform professionals, including speech pathologists and occupational therapists, about culturally appropriate resources such as Indigenous books and activities.

"Too often, as an Aboriginal family, we were required to kind of educate allied health services and professionals around cultural safety and our son's world," she said.

Ms Davis and her husband Adrian took it upon themselves to gather information and contact other Indigenous families dealing with autism.

"There was a lot of digging around and searching on the internet and reaching out to other families in our situation about what they've found," she said.

"More times than not they couldn't find anything that was culturally safe."

That's when Ms Davis decided to launch The I Am, Movement.

"As parents, we are building on this strength-based approach. We see so many deficit models in this disability space around what can't they do and why can't they do that," she said.

"For us, it's flipping the coin and saying, 'Our son can do this'."

Along their journey, the Davis family began to notice an increased need for inclusive facilities for people with disabilities at larger community events, which could be difficult for children with autism to cope with.

"The concept of disability in our community is something that's not talked about enough," she said.

To meet this growing need, Ms Davis decided to launch her latest project The I Am, Space at one of the biggest events on the Indigenous calendar, the Koori Knockout, also known as The NSW Aboriginal Rugby League Knockout, which attracts thousands of players and spectators from across the state.

"[The I Am, Space] will provide a culturally safe and inclusive environment for sensory stimulation, for relaxation, and it's where we can bring our kids or other people with disabilities," Ms Davis said.

A First Nations teenager with disability has told the royal commission how, as an eight-year-old, he was bashed by his carers, had suicidal thoughts and became homeless. Ms Davis said it would be a controlled space to fit the needs of whoever was using it and included qualified support workers.

"The activities we've got happening in that space are all Aboriginal and Torres Strait Islander. We've been supporting Aboriginal businesses as well through the process of purchasing items," she said.

Ms Davis partnered with The Disability Trust to bring the multi-sensory space to the upcoming tournament at the end of September.

"For a lot of people, they just won't go to these big events because they're just so busy, energetic and overwhelming," The Disability Trust chief operating officer Edward Birt said.

"All of the things that make them so much fun are also things that can be quite a barrier for some people."

Mr Birt said the not-for-profit disability service provider was excited to partner with The I Am, Space.

"It means that families with kids with sensory needs, who might otherwise not have gone, are going to be able to go along, participate, and just be included," he said.

Ms Davis said she hoped to broaden the service, including at NAIDOC events.

"Our opportunities are endless at this point and we're hoping that from the Koori Knockout we can expand and have a long-term perspective," she said.

Ms Davis said, while her son Slade remained limited in his verbal communication, her family was constantly discovering new things about his personality.

"You're forever learning; every day is a new leap," she said.