Jae says 'don't judge, be curious' when you meet an autistic person 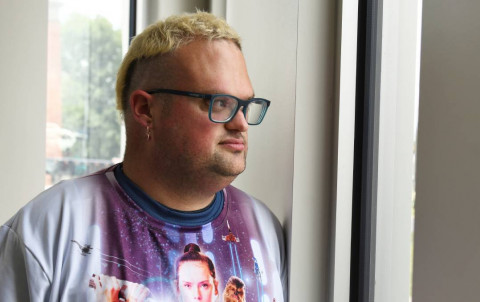 THERE are bad days when Jae cannot leave the house because the prospect of navigating changing public transport to get to Melbourne is too much. Not to mention the bright, fluorescent lights in VLine carriages.

Jae is among the 40 per cent of austistic Australians who say they sometimes do not leave the house due to the prospect of being subject to discriminatory behaviour.

Coping for Jae often means wearing sunglasses or a hoodie and this can attract "weird looks" from fellow commuters.

Advertisements feature a woman struggling with bright lights at work with her colleagues sniggering she must have had a big night out. Another depicts a man struggling to make eye contact when ordering a coffee in a cafe. There is also a mum in the supermarket checkout drawing tut-tut "needs more discipline" comments from customers in the queue for her son as he gets agitated.

Jae said when it can to awareness and inclusion, a lot came back to people offering genuine kindness and patience.

Jae works as a communication officer for AMAZE and has been monitoring comments about the campaign on social media.

Most comments are positive but Jae said overwhelmingly people kept saying the actor in the workplace commercial could not have been autistic because she would have been subject to bright lights and noise for too long for filming. But she is autistic.

It's hard because I've been told I don't look or sound autistic. Like everyone, I have good days and bad days...I have to make sure I have the right supports in place.
Jae

"It is a thing, autistic burnout, when you hide your feelings for so long to try and get through a situation. You might go home and crash," Jae said.

"It's hard because I've been told I don't look or sound autistic. Like everyone, I have good days and bad days...I have to make sure I have the right supports in place."

Jae said people who could see a disability tended to react differently. For example, when buses replace trains on public transport those who use a wheelchair or mobility scooter were usually given taxi vouchers. Autistic people like Jae needed advanced notice to plan how they could best navigate the system.

While there have been moves in business and sport to create sensory friendly times to shop or zones to escape, Jae said a lot were done with the right intentions but lacked understanding.

Some supermarkets offer quiet hours in the morning, which Jae said tended to best suit parents of autistic children rather than working autistic people. Jae said the results could often exacerbate sensory issues.

It's a bit like going to a concert and the power suddenly blows. You get confused... (you) can't process as well.
Jae

"We learn environments and adapt," Jae said. "It's a bit like going to a concert and the power suddenly blows. You get confused. You're hearing all sorts of things, like fridges running, that you didn't hear before and can't process as well."

Jae visits a lot of places to test environments for AMAZE. Inclusion champion Melbourne Museum, Jae said, had lots of sensory maps and social stories outlining what you could expect to experience in certain exhibitions to help people.

Fellow inclusion champion St Kilda Football Club creates a chill-out zone for home games in a function room. There are bean bags, toys and TV screens without sound. Jae said the space allowed for autistic people who needed the quiet, and for others who need to be loud and use energy.

In contrast, another AFL club offered sensory-friendly packs with headphones, accessible by walking through a busy, loud concourse and requiring a licence be held until the return of a pack. Jae said this was not always possible if an autistic person was having a meltdown.

"When it's done right, it's good," Jae said. "We need to look at changes that can be made on a permanent basis and to benefit more people."