'It was nasty': Children with disability bullied, belittled at school 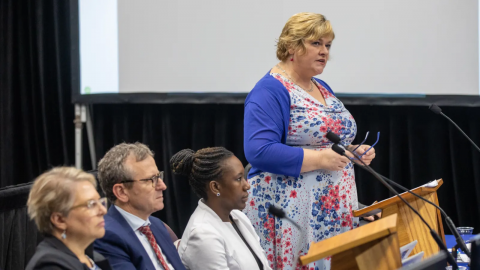 A mother of five children with disabilities has told the disability abuse royal commission that one of her sons took a knife to school because he was so scared of bullies, while her daughter was belittled by a teacher for needing extra toilet breaks.

The woman told a hearing in Townsville on Tuesday that it was "absolutely exhausting and frustrating" trying to get schools to make changes so children with disability could be included.

In opening remarks, Dr Kerri Mellifont, QC, said the royal commission had already received information that showed students with disability were "not being treated as people with the rights to an equitable education".

"You're made to feel like ... it's too hard for [the teachers]," said the woman, called "witness AAC" for privacy reasons, who is also a special education teacher.

AAC said when her daughter, who has autism spectrum disorder, needed to go to the toilet, she had to go immediately due to sensory issues. There was "a lot of trouble" negotiating this with the school and then the teacher belittled the girl about the adjustment, she said.

AAC's middle child has autism and anxiety and is now 21. When asked what would have made the most difference to him when he was at school, he told his mum: "When teachers and teacher aides helped him without making it obvious ... and without making him feel different."

The woman said her eldest son, who is now 28 and also has autism, was bullied at school. "The bullying was so extreme that he actually took a knife to school, because he was that scared." AAC said a teacher threw a whiteboard marker at him following a misunderstanding. "It was nasty."

In opening remarks on Monday, counsel assisting Dr Kerri Mellifont, QC, said the commission had already received information that showed students with disability were "not being treated as people with the rights to an equitable education".

On Tuesday, Queensland Teachers' Union president Kevin Bates told the commission disability was not considered in "any great detail" during education courses at university.

He said special schools could be phased out if individual children's needs were properly funded, but  cautioned more resources were required. "The current expectations on teachers have already reached the limit of human capacity. Adding additional expectations would stretch us well beyond that," he said.

A 2019 survey by Children and Young People with Disability Australia found 48 per cent of children with disability surveyed had been bullied in the past year and 30 per cent had been restrained or put in solitary confinement at school.

According to the Australian Bureau of Statistics, 33 per cent of people with a disability aged 15 and over have completed year 12. In 2018, the proportion of all students staying in school until year 12 was 85 per cent.

The royal commission will continue its public hearings on Wednesday.