The language we use to describe others is generally more reflective of our own beliefs, attitudes, and feelings than it is of the other person, just as the language we ascribe to ourselves reflects our relationship with our own identity, our comfortability with who we are, and how we view ourselves. There is power in language; power to hurt, to harm, to heal, and to make statements about ourselves, others, and the world we live in.

Here we explore identity-first language (IFL) and person-first language (PFL) in the context of autism, with the disclaimer that there is no right or wrong in any particular language that people use to describe themselves.

That said, there are interesting nuances to the use of IFL and PFL, which the authors have come to refer to as ‘iffle’ and ‘piffle’ respectively. While this might seem like we are making light of a serious matter, these terms are reflective of our love of language play and neologisms (made-up words) that, while being rarely discussed characteristics of autism, can facilitate a richness in communication and deepen the connection between like-minded individuals, as has been our experience. As such, it felt only fitting to employ the shared lexicon that reflects our own autistic intersubjectivity in discussing language choice and identity. Below, we will unpack the ideas around ‘iffling’ and ‘piffling’, and what it means to be an ‘iffler’ or a ‘piffler’ when it comes to discussing identity and autism.

To iffle or to piffle can be a very contentious issue in the context of autism, with many people having strong preferences for one or the other in the way they describe themselves, and/or others. Given the power that language wields, it is important to have freedom in choosing the language we use to describe ourselves; language that reflects how we think, feel, and relate to ourselves. So, while contention abounds, and opinions fly every which way, we respect each person’s right to choose to iffle or piffle when describing themselves, and we urge others to do the same. This may create tension when personal pifflers and invested ifflers come together, but discomfort around other's choices stems more from one's own convictions than the beliefs or practices of the other. 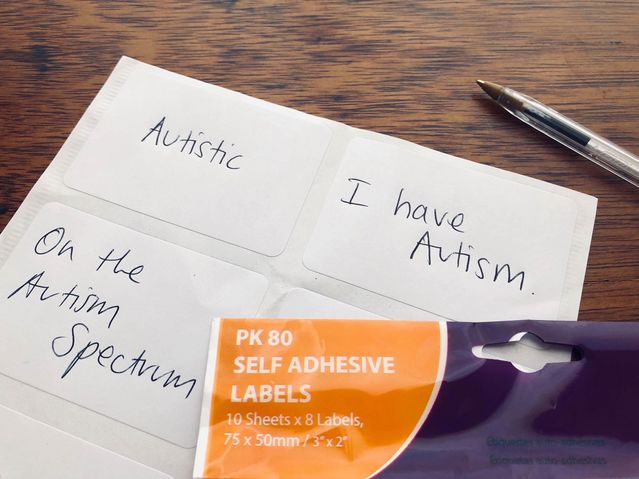 It is important to have the freedom to choose the language that best expresses our identities.

Person-first language (PFL) places the individual at the fore of the statement, and proponents of this approach emphasize that it avoids implication that a person, as a whole, is disabled. Many view PFL as a way to promote the view of people as human beings who are not wholly defined by their disability or diagnosis. The American Psychological Association’s Publication Manual (Sixth Edition) encourages the use of PFL, however, a seventh edition is due for release in October 2019 which may see a change to these guidelines.

The use of PFL places somewhat of a linguistic distance between a person and their disability or diagnosis. From a semantic perspective, this can soften the impact of a statement and might be employed to mitigate potentially negative reactions from others. In Australia, PFL is often used in institutional documents and policies, possibly reflecting a risk-averse stance to avoid causing offense.

IFL: “I am autistic”

Identity-first language (IFL) is frequently the choice of autistic advocates and autistic individuals in these circles, because it ensures that autism is not overlooked. The Autistic Self Advocacy Network of Australia and New Zealand states in its constitution that IFL is preferred because it is a “cultural and political signifier”. Choice of such language may not only reflect the importance of the autistic identity but also denote pride.

Another argument used by proponents of IFL is that person-first language is frequently used in other contexts to describe an undesirable condition or affliction. To say something like, “my aunt has cancer,” in comparison to “my aunt is cancerous,” might technically carry the same meaning, but the latter conveys a very negative nuance. Linguistically, possessive terms in the English language (to ‘have’ or to be ‘with’) have natural antonyms; one can as much be with something as they can be without it, you can have something or not have it. Use of IFL reinforces that autism is ever-present in an autistic individual and cannot be left behind, set down, or otherwise removed from their experience of the world.

Why we choose to ‘iffle’

While we entirely respect the choices of others who prefer to piffle, in referring to ourselves, we are intentional ifflers. We are Autistic. For us, iffling is our way to tell others and the world that there is no shame attached to being on the autism spectrum. In fact, we even choose to capitalize the term when referring to ourselves as Autistic. This is both a personal and political statement, and it carries a connotation of self-worth as Autistic individuals.

It sometimes comes as a surprise to others that we are quite proud to be Autistic and, politically, our beliefs around this align with the values of other minority groups, such as the LGBTQI+ movement, in promoting a view of autism not as a deficit or a defect, but as a difference and a diversity that brings a richness to humanity.

We are thankful for the strengths we possess that are characteristic of our Autistic traits, such as the focus we apply to our special interests which has seen us both pursue a depth of knowledge related to our respective careers. While being Autistic presents us with significant challenges in a number of contexts, and there are areas in which we struggle in comparison to our neurotypical counterparts, we also see areas in which our neurotypical peers struggle in comparison to us.

How should we refer to others?

Much like discourses around other marginalized groups, language and identity are areas where self-determination is critical and not up for debate by others from outside of that group. Where an individual is yet to form their preference, or unable to communicate it, it is worth holding your own beliefs lightly and considering the information above, as well as the preferences of others on the autism spectrum who are able to communicate them, when deciding whether to piffle or iffle on someone else's behalf.

In short, whenever possible when referring to other people, we should always use the language that they prefer. We need to respect others’ choices and preferences and use terms that they are comfortable with. If in doubt, there is nothing wrong with asking someone what kind of language they would like used in reference to them. Personally, the authors see it as a sign of respect when other people are considerate enough to seek our advice about the language we ascribe to ourselves.

Whether you are particular to piffling, or are more inclined to iffling, language and the nuances it engenders are critical to an inclusive discourse around autism. We invite you to iffle and are equally pleased if you piffle. For those on the autism spectrum, embracing our identities and establishing agency in the freedom to choose the appropriate language in developing our narratives is a critical step towards positive self-concept and well-being. We, the authors, are ‘capital A’ Autistic, and we encourage you and others to explore language to identify terms that embrace your own identity and, with it, a better sense of your place in the world.